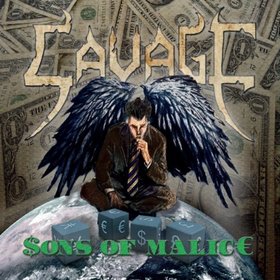 Savage is one of those bands from my distant youth that was a part of that large template for what I was to musically enjoy later in my life. Part of the NWOBHM movement of the early 80's, Loose and Lethal was not only a fine piece of musical history, it was practically a necessity, right up there with the Angelwitches, Mythras, and Witchfinder Generals of the era. If you haven't heard the 1983 aforementioned album, I heartily suggest that you ingest it, stat.

One of the terrible notions associated with the NWOBHM is that all of the bands disappeared after one, maybe two releases, and that's simply not the case. Yes, many bands put out the rare 7” or demo and fell into the grand oblivion of time and wasted talent, but Savage has been kicking around all of these years with no less than four studio records, a live album and a compilation under such weighty belts. The latest record is Sons of Malice and it houses every subtle metal nuance, using each of them to the absolute heights of vibrancy, skill and importance.

The opening track in “The Rage Within” lays nicely the foundation for a classic-sound experience that can easily blow your mind, but it's the bluesy-and-ballsy “Black N Blue” that calls upon every corner bar band's expertise to create that sick blues riff that drifts so sweetly into heavy metal territory and marries, with relative ease, the two interconnected genres. While too many current bands are slapping brand new saddles on this famously underrated warhorse from my younger years, bands like Savage take its initial influence and sound and rebuild the vessel with modern specifications and an old-school blueprint that never fails if done properly.

The mood of this record is traditionally heavy; it's not overpowering or over-polished by any stretch. The simple, yet effective approach to the title track, for example, leaves plenty of play for the listeners, past and present, to dig Savage all over and realize that the band's survival all of these years was absolutely worthwhile and important. Like an old artifact unearthed, dusted off and put on display for millions of latecomers to see and espouse wonder at, Sons of Malice creates the soundtrack to a million life stories that we oldsters can relay to the kids of our movement. It also has enough punch and appeal to suck in the youth of today and show them the path to heavy metal rock goodness can be great without benefit of useless or sloppy riffs or keyboard-driven insipidity for the fringe listeners that crowd the halls. It's a wonderful trip to make!

What I find particularly engrossing are the vocals, a simple and strong delivery from Chris Bradley, who also thumps the bass for Savage. There's just a strong feel of effortless resonance throughout. This is raw and unfiltered as it gets, with every bit the bar-band feel that is both viable and honest, two important factors in today's disheveled 'polish-it-up' system of musical epiphanies. “Junkyard Dogs” is the dirty underbelly of straight-forward rock music that can almost be called the working-class metal with its unrefined, yet easily adaptable sound that makes you proud to be an old fart disgustingly surrounded by know-it-all kids who so want to take our musical genre from us. Bands like Savage make this virtually impossible because, as any self-respecting metal fan over 35 can attest, no matter what is out there now laying claim to the movement we saw the best of the best and lived to tell the tales.

What I also find great about this latest record is that Savage hasn't let up one iota from its original sound. Yes, the overall tonal sound is updated for today's generational pull, but the general extolling from this fan is by way of the purity of the 'thick-line' metal music from a generation long thought lost before the would-be heavy metal archeologists of today found a new bag of bones to pick dry and bleach clean. That said Sons of Malice lives up to every expectation I had going into it, saying nothing for the fanboy excitement I felt hearing those riffs in “Waking the Dead” that take me right back to 1984, my 13th year of life and about my fifth year into a heavy metal sojourn that has lasted me my own lifetime thus far.

For me, Savage still has the original fire and, while buffed to a pretty nifty shine, Sons of Malice proves that old dogs don't require new tricks, just audiences willing to look into the attics for some truly important pieces of the past.