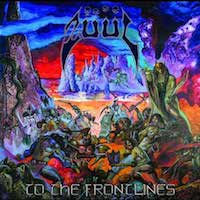 How sweet it is to hear another gem from one of the better bands to emerge from Illinois in as many years. To the Frontlines is Züül's sophomore effort and actually surpasses the majesty of the debut from 2010. I never had a doubt.

Züül is one of those bands that just forces you to eagerly anticipate its next musical move. After hearing Out of Time two years ago and having the privilege of doing an “Emerging Talent” profile of my fellow statesmen, I knew well what was coming for the metal movement with these guys. There are no bells and whistles, no pomp and circumstance, and no flimsy efforts with Züül; what you hear is pure metal music that at times calls upon Thin Lizzy's magical prowess meshing perfectly with some of the classic traditional sounds of the infamous NWOBHM. With a quick and razor-sharp precision, To the Frontlines captures a moment in time and provides a new and improved soundtrack for the modern metal era. Along with Speedwolf, these guys are going to keep making loud noises all over the genre.

Each track follows a similar pattern in the basic, stripped-down galloping through barren battlefields of yesterday's influential forefathers. Whereas many bands today seem to be calling upon this artifact of a heavy metal sound, Züül manages to step up the momentum by issuing fist-banging, head-bobbing anthems like “In the Cellar” or “Show No Mercy”, which showcase the band's ability to fire on all cylinders and offer both the aging 'head and the young upstart a fine view form a bridge often buried under commercial rubble. From the standard riffs to the resonating guitar solos, this album finds the very best of modern heavy rock and takes the process to another level of greatness. The speedy effort of “Heavy Lover” sounds like something straight off the old Mausoleum label's itinerary, and if you're not familiar with it you're simply missing out. This track here is the catalyst for a past greatness that is revisited with the utmost care and diligence. The thick wall of sound that Züül produces within these songs pretty much covers the ground and simmers before ascending slowly towards the ceiling in a sort of bluish haze that's too perfect for textual summarizing.

Once “Skullsplitter” passes into the headphones I immediately backpedal to my Thin Lizzy comparison, only with much more viable speed and intensity, though the Gorham-like riffs and tones are ever prevalent. With a high-intensity output of that caliber, the slowdown of “Of the Fallen” is a welcome instrumental 'lull' that fools you into thinking you're in for a respite, only to be dropped face first into “Bounty Land”, a sort of anthem-like effort that marches along rather nicely. Vocalist Brett Batteau has that familiar even tone that sounds so British Metal it's hard to fathom this being a new release, but rest assured it is and Züül is one of the bands for the new generation that you simply need to hear.

There's no sophomore jinx here, people - To the Frontlines encompasses all of the antiquity of the distant past and the relevant tenacity of today's take-no-prisoners metal assault for the perfect sound in an imperfect period. Stop wishing for the past to come alive and rejuvenate the spirit with some classic rock 'n roll.