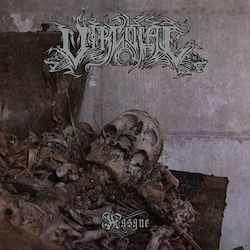 What is it you seek when listening to death metal? Is it the vocals that draws you towards its immortal root, is it the expectation of being fully encased in its musical form, or is it a combination of both? Whatever it may be, prepare to have a curve-ball thrown at you with dumbfounded dexterity. Having released 2 demos and a highly regarded EP titled The Cursed Travails of the Demeter, Ireland’s Vircolac, whom is sheltered under the gallant and indomitable hand of Dark Descent records, returns with a new chapter. On Vircolac’s 2019 debut full-length record, Masque; being evidently cut with care and surgical precision, these werewolves cast their claws into the skin of the genre ripping the fiber of death metal and reconstructing its entrails in the image they see fit. The final product mirrors an obsequious council of 4, fully enveloped in the task undertaken to maim and re-mend the paradigm.

Vircolac wields multiple weapons in order to get the job done. Numerous styles are sewn into their brand of death metal and can be clearly heard on Masque. From synth-driven sections, semi-technical to the groovy pacing heard on “Titan” and “The Long Trail”, to the altering current of blast beats and guitar riffs occurring; Vircolac’s approach undergoes many active changes during the record’s playing time, in-so keeping the session interesting. The way diverse sections are entwined leaves the listener with a high impression of the band’s efforts. Though some entries are 6 to nearly 7 minutes in length, you never get the feeling of being overburdened due to how and where Vircolac infuses and introduces those sequences.

From “Titan” and “So I Hang from a Wretched Tree”, to the groovy piquant of “Masque”, exhibit a sense of motion in their transitions thus preventing the material from resembling a cut and paste job. With those tracks being the lengthiest it was of highest importance to nail every conversion as frequently as they occurred. Each passage reflects purpose and ensures the unorthodox spirit of the recording is entertaining. And with the vocals being perhaps the most surprising aspect of Masque, it is a fitting match to the rather eccentric beauty of the blend showcased. Guitar solos sprinkle its share of sparkle to the decor of fine drumming and black metal-esque snarling and yelling. Even with all this variation and unexpected twists occurring, the death metal aspect is never lost throughout the record’s run-time. The bass is rather thin and mixed low; however, it is audible enough as to nourish the leading instrumentation in escalating the effect of the music.

Masque has a thoughtful mix, thus ensuring each instrument is balanced and primed to complement rather than overwhelm the record. The vocals are fairly understandable (to some degree) once heard but retains a consistent rawness for the entirety of the record’s length. There’s lots of hooks coming from the guitars, they put on a spectacular showing in both the leading and soloing departments. Masque is a genuine all-round performance that attempts to create something Vircolac can call intrinsically theirs; and to a convincing degree they have accomplished that. The debut full-length joins the list of honorable releases to have emerged so far in the year. A new shadow lurks in the underground, it bends and breaks the rules of death metal, tightens the screws of perfection and aims to reinvent the approach primarily taken.