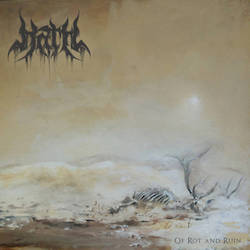 The track lengths are fairly long which enable the band to demonstrate their songwriting skills and depth to adequate measure.  There are equal parts Cryptopsy and Morbid Angel here.  The technical portions are counterbalanced by moodier portions that make this a varied and interesting release. There are extended sections of noodling, but they are kept in a confined position by the structure of the work.  It still isn’t perfect and tends to lose out a bit in the progressive death metal stakes as it isn’t completely committed to that facet.  Thus bands like Death have material that is more interesting and fulfilling than what is found here.

Still, with such a colourful, varied and impactful sound, this ends up being one of the more rewarding death metal albums of the year so far.  If it wasn’t for the vicious vocal style, this would be more comparable to an older Opeth release with all the dynamics present.  Still, the music is definitely heavier sounding than Opeth at even its most extreme and brings some huge chops to the table.  Of Rot and Ruin is definitely a thoughtful and impactful death metal release.