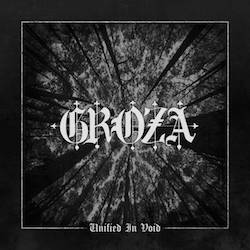 Here comes another copycat band known as Groza. At this point I feel like giving Mgla all the credit for the music created on here because it all sounds strikingly similar to a what was produced on Groza, With Hearts Towards None and Further Down the Nest; all Groza did was take those albums, extract some memorable parts, threw in a few newer elements and improved the production. As If Gruesome (USA) and other profiting "tribute bands" aren't enough, this had to be added to the list of indolence. I don’t understand why you would exhaust your energy to make the same sounding music, attire yourself the same as Mgla and even more, name your band after a record created by Mgla. I guess it’s easier to copy and receive credit than to innovate and receive credit + constructive criticism. If more bands were being chastised for leeching off others, this kind of thing would not be so barefaced and prevalent; but given the recent physical media boom (primarily vinyl) everyone is in a band and making music. Oscar Wilde’s “Imitation is the sincerest form of flattery that mediocrity can pay to greatness” has never meant so much particularly today's music and ore specifically metal; there is so much plagiarism that the black and death metal genres are bound to become parodies of themselves if this path is continuously taken.

By now you would probably think the record is mediocre, but the answer is no, actually its ok. However, this is music that Mgla has already made, Groza just added new lyrics and a beefier cleaner production to a sound that Mgla has mastered. Groza’s ability on Unified in Void does not exceed Mgla’s, so then what is special about the record? There must be some redeeming factor, something that justifies the band’s work regardless of the sprawling lack of originality and blatant robbery. The title track opens up similarly to that of Mgla’s “With Hearts Towards None I”, other songs tear pages from Mgla’s Groza, Further Down The Nest and snags some Inquisition riffing.The tremolo picking is very Mgla both in tone and technique, the drumming borrows the more easily executed parts of Darkside’s maelstrom of madness and the vocals are quite good with some added discernible grunts here and there. There is one song on the record that has a very punk/hardcore middle section, I think its "Unworthy" (what a coincidence); and unlike Mgla's music that has a peak/climax, Unified in Void just staggers along except for the track "Thanatos" that showcases decent acceleration and deceleration, but even then the Mgla similarities are easily heard.

So then the only reason you should purchase the record is for some different vocals scantily sprinkled over an already cooked dish. Or maybe it's the lyrics that most people will support the band for. Should one rate the record based on how well they copy Mgla or should it be rated based on the little effort made to innovate. If Mgla or any other band could try creating a new sound and aesthetic and gain much success from it, then that should be enough motivation for other bands to seek individuality in their own music. Yes a band's sound may be traditionally this or that; however, it is vital that a sincere attempt is made in establishing a sole identity.

This laziness only contributes to irrelevance in any given genre. Instead of copying one should strive for individuality; this is the attribute that often propels new bred creations and inspirations.

“Blessed be the tailors
The masks are cut to fit

Blessed be the woodworkers
The crosses and the gallows