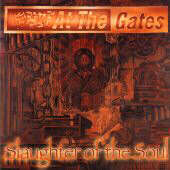 Type: Full-Length
Release Date: 1995
Label: Earache Records
Genre: Death, Melodic, Thrash
1 Blinded By Fear
2 Slaughter Of The Soul
3 Cold
4 Under A Serpent Sun
5 Into The Dead Sky
6 Suicide Nation
7 World Of Lies
8 Unto Others
9 Nausea
10 The Flames Of The End

Man, I would love to have been there to see the look on the members of At The Gates face's when they walked out of Studio Fredman... They must have had the biggest shit eating grins on their faces!! They must have known that they were about to drop an atom bomb on the metal world!!!

From start to finish, "Slaughter Of The Soul" is the most perfect 30 minutes of metal since "Reign In Blood", quite possibly even better. There is not a single weak second on this opus, as not one note is out of place. If you've never heard them before, At The Gates plays "Gothenburg" Swedish death metal, and on this, what unfortunately was to be their final album, they perfected their craft. Each band member gives it their all on this, and vocalist Thomas Lindberg (Lock Up/The Crown) really pushes the album over the edge with his tortured and heartfelt screams. Brothers Anders and Jonas Bjorler (The Haunted) (guitar and bass respectively) laid down some of metals all-time greatest riffs on this one ('Blinded By Fear', 'Slaughter Of The Soul'), and rhythm guitarist Martin Larsson adds incredible depth to the music. The drumming is handled masterfully by Adrian Erlandsson (now in Cradle Of Filth), and he proves that he is one of metal's foremost skin bashers with a never-ending supply of complex rhythm, fills and impeccable timing.

Every aspect of "Slaughter Of The Soul" is perfect. From the ferocious music to the crystal clear Studio Fredman production is flawless. Lindbergs lyrics are amazing. Mostly centering around depression and suicide, they provide a very intelligent social critique of the sick world we live in, and listening to his anguished screams sends chills down my spine every time... just listen to him purge his soul on 'Suicide Nation' ('suicide... jaws locked around your spine') and on the their final "real" song 'Need' ('open me... with your kiss of steal, end my pain, set me free'). I just can't lavish enough praise on this album. Out of the approx. 400 CD's I own I listen to this more than any other, almost everyday of my life. It just sucks that they broke up, but at least they went out at the very top of their game.

Bottom Line: This is Swedish death metal at it's very best. If you don't own it, drop whatever your doing right now and track it down. If you don't, you shouldn’t call your self a metalhead. Absolutely essential.