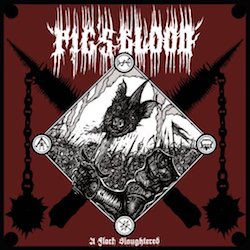 Pig’s Blood impressed me with their 2017 s/t debut full-length record. It was manufactured utilizing some of the aspects I love about both death metal and black metal. The production was perfect for such a pummeling release, the guitars torched the session whilst the drums and vocals applied a brutal branding. However amidst all this greatness stood a band that would go insufficiently recognized for such a barbaric release. There were other bands at the time putting out credible material along the lines of the genre but never stood a chance against Pig’s Blood debut record; and even as a new face to the underground, the pedigree of the material delivered was stunningly high. With A Flock Slaughtered Pig’s Blood set-out to seize all that had been due to them and much more. With this new session in the abattoir, none of the sheeple are spared; all that was dreaded has now manifested with brute force.

A Flock Slaughtered is an unmitigated bludgeoning from beginning to end. The essential ingredients for such a twisted display of domination are indeed present and in return offers a recording that is unforgettable. The drumming, heavy and consistent in its precise bashing, the guitars, ripe with both melody and rage, whilst the vocals deliver penetrating growls and grazing snarls, as filth is spouted without shame. Every track is supplied with a satisfactory dose of competent musicianship; the band clearly knows when to accelerate and slow its row. What has been a key identifier of Pig’s Blood music is the way they allow the tracks to set-in by playing at a moderate speed. With the opening track “Gates Ripped Open (Scum Choking out the Meek)”, the pacing is just right as it gives the vocalist the adequate amount of breathing room to emphasise his delivery and build-up his range simultaneously with the drums and guitars, thus adding a felt impact when the growls and snarls are presented. Even though the music is relatively mid-paced, in it lies a certain level of extremity and urgency that steadily grows as the music progresses from one track to another.

What I have discovered during the numerous times listening to A Flock Slaughtered, lies within the new journey it generates on each repeat. It feels like a different record each time, with tiny twists and turns hiding under the hammering sound, when you make the discovery you are immediately delighted as if striking gold or finding a long lost jewel of yours. Those little moments mean much for a record that stands amongst very competitive bands of the genre, hence reinforcing the importance of offering something that sets your record apart from the rest in the quest for identity. Credit has to be bestowed upon Pig’s Blood for offering more than just a follow-up to their debut; by activating a more noticeably hybridized sound, they have been able to stand clear of stagnation. This is clearly a regiment that exhibits veteran skills though only 2 albums in. A Flock Slaughtered is the record that should certainly see more recognition and acclaim being given to Pig’s Blood. Even though this release is outstanding in many ways, I still believe Pig’s Blood have yet to meet their musical apogee.