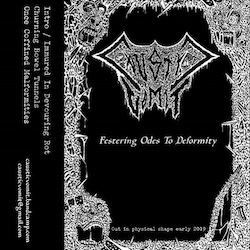 If you’re one for the dirty and depraved versions of death metal, the kind that fondles with your warped mind, then your fowl craving is about to be granted. Upon hearing Caustic Vomit’s debut self-released demo, I immediately thought they were an American band, to my surprise this unit turned-out to be Russian. Had no idea this sort of filth was infecting Putin’s paradise. Festering Odes to Deformity has to be one of the best debut doom/death metal demos of all time. This is the kind of material usually representative of a veteran band, a gathering that has taken a plunge in the sewers more than a few times.

Can’t recall how I discovered Caustic Vomit, but I can assure any doom/death metal supporter of this fabric that they will not be disappointed in the least bit, once giving Festering Odes to Deformity 30 minutes of their time. Firstly, how deep can any human being growl before before he/she begins to eat his/her tummy out?. These vocals are no joke; imagine Lord Angelslayer’s vocal technique being merged with that of David Mikkelsen and Antti Boman, you will end-up with some of the deepest guttural gestures ever. This method of internal growling on Festering Odes to Deformity is the highlight throughout this 30 minute act.

The drumming and guitars play their respective roles with a fair level of adroitness; with matching synchronization that is key particularly in the slower sections; the musicians in these fields direct the flow of Festering Odes to Deformity with vigorous virtuoso whilst leaving no space for mindless filler. If it has to be played at the rate of a sloth, then just that is done for how much ever time is required to vacuum the listener's attention. An in the event he/she may feel the urge for faster or slower installations on any of the 3 tracks; enough variety is injected at the most suitable moments. Given the music is varied in speed from time to time, the transitions work like well-oiled engines, as they don't just quicken in speed or decelerate in motion, they are adequately accompanied by brill guitar leads and solos.

Each track is roughly around and just exceeding the 10 minute mark, but man does time rush by, I was on my 5th repetitive listen without having a clue as to how long I had been sitting and absorbing the filth. All the tracks are compositionally strong, though the winner began as a toss-up between “Immured in Devouring Rot” and “Once Coffined Malformities”, the opening track claimed the prize. This came as a result in the vocal dominance that exuberantly mounted the record’s addiction level. That said, every song features something that causes you to remember it by, I’ll leave that for the listener’s discovery. And though the production is fairly smooth, a crumbly bass tone loosens the sound thus causing the overall mix to resemble a rotting/slow decomposing state that is given further assistance by the churning vocals.

This is a band that needs to be signed and supported; the potential is far too great to be ignored. If this is a demo, I can only imagine the intensity of a full-length debut release. I urge all to pay keen attention to Caustic Vomit.