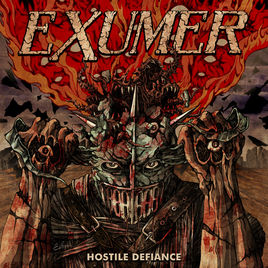 Although Rising from the Sea did not fully met the high expectations, it was a pity that Exumer vanished into thin air shortly after this release. The band seemed to share the somehow tragic fate of formations such as Atlain, Iron Angel or Violent Force. All of them had left the stage much too soon. But things turned out differently and here we have the third full-length since the reunion in 2008. Hostile Defiance, this is probably the most important news, is aligned with the previous works of the band. Exumer swing the thrash metal whip and they are experts in doing so. The early days of the Bay Area shimmer through every note and the precision of the riffs is impressive. Lead vocalist Mem has given interviews where he said that the band wanted to broaden its spectrum. This would be the reason why they have integrated more melodic sections. Honestly speaking, his statement made me slightly nervous, because I did not want them to discover a new mildness. However, Mem seems to have a special humor - Hostile Defiance is still a merciless thrasher and even mid-paced songs like "Descent" do not lack energy, pressure and great riffs. Only its somewhat feeble solo leaves room for improvement, but that's only a minor flaw.

Exumer sound traditional yet spontaneous and impulsive at the same time, not only at the beginning of "Carnage Rider". This is always a great combination for an old geezer like me. Re-inventing the wheel has never been the business of Mem, Ray and their comrades, but the gang always had a lot of good ideas when it came to a new design for wheels. The riffs were constantly sharp enough to cut off heads very precisely and the level of velocity deserved respect on each and every new full-length. Not to mention Mem's commanding and vigorous voice. He does not have an outstanding pitch, but he manages his part with great ease - and I admit that I like to listen to the original singer and not lead vocalist no. 5 or 6. His voice marks an identity creating element, no doubt at all, even though his snotty performance spreads some punk vibes on the new work.

Even though there is nothing wrong with this album, it seems to be slightly weaker than its both predecessors; and this is not due to the shitty artwork. I have some difficulties to find out songs that can compete with the highlights of The Raging Tides. Of course, a good predecessor always tempts me to set the bar too high. Therefore, do not take my complaints too seriously. Especially when considering tracks like "Dust Eater", the little brother of "Shadow Walker" or "Raptor", the rightful heir of "Sinister Souls". The guys are still motivated to organize a proper thrash feast and if one knows the former works, it goes without saying that the flawless production puts the cherry on the cake. Clearly defined, aggressive and clean but not sterile, that's how the songs burst out of the speakers. However, minor compositional defects (for example, the actually "King's End " derails during the weak bridge) cannot be ignored and the cover versions at the end are as superfluous as they can be. Hostile Defiance does not disappoint, but it will not reach the status of a milestone in Exumer's discography. Seen from this perspective, it is somewhat similar to Rising from the Sea.