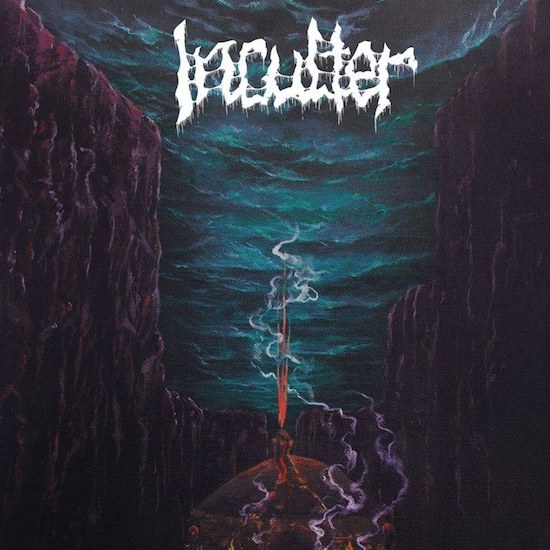 Norway, once almost a synonym for black metal of the highest standard, has broadened its horizon significantly during the last years. Isolated signs of life remember the comeback works of Ancient or Immortal or think of Mayhem’s present impossible mission to write another “De Mysteriis…”, cannot hide that black metal has become just one topic in the country’s portfolio. Okay, I am no expert for death metal and in terms of (pure) thrash the fjord residents still have a backlog (despite great newcomers such as Shakma). Yet we all know this extremely shabby niche called black thrash and this is exactly the place where many Norwegian ruffians celebrate their way of powerful, mean and aggressive metal. So come on, let’s join the feast.

Inculter’s second full-length presents all the features that make this cocktail of thrash and black metal so fascinating. Despite the album’s title, their Fatal Visions are surprisingly lively, energetic and agile. The vital quartet has some riffs up its sleeve which are not only swift as an arrow. They also exactly meet the degree of nastiness that results in a wry smile on the uneven face of each and every fan of blackened thrash. Just wait a moment, I take a look in the mirror… yes, the statement of the preceding sentence was correct. I could also mention further positive elements, the robust voice, the precise drumming or the foundation laying bass, but there can be no doubt that the guitar prevails here. All songs shine in view of the riffs which have elements of early Slayer, early Aura Noir and late Nocturnal. The four dudes play their tracks with boisterous vehemence and even though they do not prefer conventional sound patterns, their songs do not lack a certain degree of catchiness. Maybe one can say that they are pretty similar to each other, but this is not a bad thing per se.

Production-wise, the album meets the expectations with great ease. This is no low budget underground rumbling, but a sharp, well-defined and vigorous sound that has nothing to offer for friends of sterility. Okay, I am listening to another album that neglects the bass guitar, but hopefully you agree that this is just a venial sin. By contrast, it’s really scandalous that I cannot tell you the names of the album’s outstanding songs. Forgive me, but all of them are like a pizza in my favourite Italian restaurant: simply brilliant. Of course, we can discuss about nuances, yet one thing is for sure: the overall impression leaves no question unanswered. So, I just can say that the best moments are whenever the four-piece accelerates speed. Their tempo shifts ennoble the songs, because the guys are able to create one of the most intoxicating approaches - and so I almost forget my depression about the fact that their compatriots of Condor have called it a day. Fortunately, there are still some competitors to challenge, both in Norway (Deathhammer, Nekromantheon) and in the rest of the world (Alcoholocaust, Desaster, Urn). No doubt, Inculter do not need to shy away from any confrontation.

It's been 4 long years since highly acclaimed but rough around the edges debut Persisting Devolution from this Norwegian quartet. 4 years of experiments with new members, sounds, guitar tones and music styles that concluded in two short words 'fuck it'... and I'm damn happy about it. Inculter was and still is deeply rooted in 80's era of black, death and thrash but with modern production, up to date style and arrangements that make them stand out on their own.

I'm going to age myself here but to me this is Inculter's 'Schizophrenia', a classic from Sepultura that I spent my youth headbanging and learned playing my first guitar riffs. I don't know if this is accidental or Inculter's way of saluting the past but even the tone of drum fills sounds very similar to Igor's. Don't read into it as plagiarism of the original but rather as a complement since we all know what effect that classic record had on Brazilians' career. Inculter might not break new grounds or bring revolutionary ideas but that wasn't the objective when this band was created in a first place. What they lack in novelty department they definitely enunciate in atmosphere. There's something about that youthful flair, aggression and extra spark of energy that exhibits from this record that brings a big grin to my face every time I hear just first few notes. This is thrash with attitude, thrilling riffs and venomous solos backed by nonstop battering drums and bass that creates head snapping dynamics usually not recommended for longer periods of time. In fact, Fatal Visions doesn't have a dull moment bursting with never-ending array of guitar licks and ravaging vocals. Everything delivered with determination and passion wrapped in barbaric and dark mist. Sinister aura emanates through cover artwork and lyrics leaving nothing to chance and showcasing band's maturity and immense progress.

Inculter's Fatal Visions is a raging inferno of death and destruction that doesn't let up for a second during 8 pulverizing anthems. Dust off your leather jacket and jeans, put on your old snickers and let's hit that pit and be wild again. With Fatal Visions Inculter emerges as a leader of black/thrash and delivers one of the standout albums of the year, period.