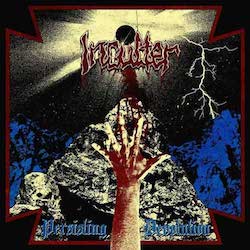 Five years ago, Inculter from Norway released their debut Persisting Devolution. Its artwork seems to be inspired by Destruction’s “Infernal Overkill” and seen in hindsight, the first full-length of the German pioneers was one of these albums that established black thrash metal. With that in mind, it is no surprise that the here presented formation also prefers to offer this vile hybrid. Norway has already proved its leading position in this context. Just like Germany or Australia, it houses many filthy armies that like to perform this stubborn style. Inculter confirm the outstanding reputation of Norwegian black thrash. They attack with the vehemence, velocity and energy of debutants while presenting mature (not complex) compositions simultaneously. Do they give new impulses to the scene? No, not in terms of stylistic evolution, but yes, every fresh collection of inspiring songs helps to keep the scene alive and to remain it of its own strength.

Inculter avoid experiments completely. All songs are cut from the same cloth and I cannot deny that their individuality suffers from this fact. Yet despite this situation, the band mixes the usual ingredients successfully, no more, no less. This means the listener dives into a well-structured inferno where a raw voice, extremely swift guitars and a competent drummer with a proclivity to hyperactivity set the tone. The somehow pale intro is the last peaceful region; the following nine tracks proudly deliver this special form of roughshod attitude that characterizes black thrash metal. 'Death Domain', for instance, represents the approach of the Scandinavians. A stomping beginning leads to faster sequences. Blast beats are not forbidden, but the quartet also gives a slower part room for development. The tempo changes create a very dynamic tune. It only marginally suffers from a lack of catchiness, but, just like it should be for a representative track, it is not alone in this. Inculter have penned fascinating riffs, great leads and stormy verses, only the recognition value satisfies high, but not highest expectations.

The riffing is rather minimalistic. Due to the nearly permanent velocity, the guitars do not always enjoy the space they should have. They speed along the highway of thrashing blackness and give brief yet effective impulses. The comparatively multi-layered 'Traducers Attack' puts the focus on the opening riff, but this remains an exception. By the way, the guitars profit from the production. Black thrash is underground music per se and therefore it does not need an “undergroundish” production. Persistent Devolution sounds mean, aggressive and sharp, but not overly dirty, rattling or unbalanced. It has this biting character that the subgenre is well known for and therefore the sound engineers have fulfilled their duties competently.

Inculter’s debut is no outstanding milestone, but a very clear statement at the beginning of their career. Just like their stylistically comparable compatriots, they do not lack potential, impetuosity or destructiveness. This word brings me back from to my own compatriots. Not only the artwork, but also the riffs of early Destruction have obviously been a source of inspiration for the dudes. And honestly, I know a lot of worse influences (for example the Destruction albums of the last 15 years...). Consequently, I enjoy the ten tracks of this album and if I would be free from back pain, I would almost feel like it’s 1985.