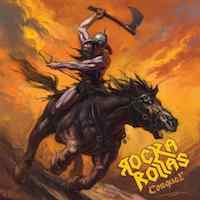 I'm not exactly sure what is happening in Sweden of late, but whatever seems to be afoot over there is both exciting and befuddling in one sweeping chord structure. Between Steelwing, Air Raid and now Rocka Rollas producing such high quality heavy metal I think I may just pack up and move to the cold winds of Scandinavia. I know I'll fit right in....

So, as it sits in my ears right now Rocka Rollas' latest EP in Conquer takes the very best traditional metal and assembles yet another gem for StormSpell Records who, in this humble writer's opinion, is picking up where Heavy Artillery (RIP) left off in a haste. The bands on this label manage to take up the mantle of modern day straight-forward heavy metal ala Judas Priest, Anvil, Helloween, et al. In fact, the initial bio I received on Rocka Rollas compares the sound to Kai Hansen-era Helloween (which, admittedly, they had me right there), Running Wild and Blind Guardian, all very noble and accurate comparisons. The lead-in there is that wonderfully primitive sound that might have seemed dated in 1993 when Sweden's death metal elite started popping up in record numbers, but it fits so well today.

The vocals are a throaty delivery that resonates well in the recesses of your head as you take in that oh-so-sweet guitar tone. Nothing here is left to bland design or plasticity; the tracks by themselves are small glances backwards to a time when speedy riffs weren't reliant on blast-beats and double bass drumming to compliment the tone. The simpler things in the music of yesterday are to be found here in all of their numerous glories. With a tight production and a brilliantly thick tone, this EP is on my 'to-buy' list, and at 1000 copies worldwide I'm grabbing this up faster than a Zakk Wylde pinched harmonic! I particularly love the track “Riding the Metal Storm” which just screams mid-80's power metal the way it should be, void of keyboards drowning the leads and simpleton female singers pouting it up for the cameras and just languishing in mediocrity at every turn. This is about as real as it gets, folks; true power metal is definitely making a comeback and it sounds so damn good!

The real kicker here is that this band consists of two individuals doing everything themselves, Joe Liszt handles the singing and Ced expertly handles all of the instruments. That in and of itself, is making this band even more incredible the more I listen to this awesome albeit, short collective.

In these four tracks the musicianship and overall velocity of Rocka Rollas comes out in every single note, every bend, solidifying the band's burnt signature in the grand old oak that is the Swedish revival of trad-metal. Conquer states, with genuine reinforcement; just how amazing heavy metal music is by stretching the boundaries of both historical and musical nuances to create what might well become an historical document in the years to come.