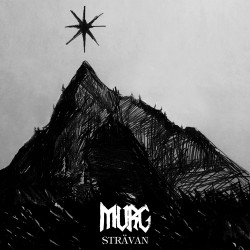 With their two albums released so far, Murg have fascinated and disappointed me simultaneously. They are doubtlessly gifted with the talent to create an absolutely black, icy and apocalyptic atmosphere, highly intensive and very profound. Nevertheless, they have always mixed the parts which express their outstanding abilities with completely calm, totally lukewarm sections where the band drives on empty tires. This made it hard to celebrate their first albums without a tear in the eye. But perhaps Strävan pushes the duo on the next level?

At first glance, it becomes obvious that the dudes did not modify their style. This is still absolutely honest black metal with influences from Burzum or Pest's masterpiece "Dauðafærd". Chasms open up and the listener stares into fathomless depths. The title track emerges as a beast of black steel, stoic, triumphant, intense and equipped with vocals that embody total bitterness and natural gruesomeness. The audience is irresistibly drawn into this maelstrom of darkness and once again I think that Murg have a titanic potential. So, it's good to experience that the title track is a worthy representative of the album, but it even gets better. There are many parts on the album that hit the bull's eye while leading the listener into the most infernal Nordic battle. The fierceness of "Korpen" marks the culmination of this battle. Murg show their most brutal side and they do it with passion and craftmanship.

But what about the deficiencies that marred the impression of the previous works? Well, Murg still offer some rather cautious parts, some of them with a tiny touch of folklore. However, they are better embedded than before and do not cause damage. Once they made the icy cathedrals of the Swedes crumble, now they are acceptable due to their more intelligent integration. I still would prefer a continuously rabid approach, but things seem to be on the right way and that's a positive finding. Speaking of positive details, the production must be mentioned, too. The voluminous guitars create this fatalistic aura which every black metal appreciates, and the agony of the screaming lead singer contributes to the basic mood of Strävan as well. Everything is offered with a sound that finds its place between blurred and transparent. Especially the furious sections appear as a frozen lump of raw meat and high-fidelity fetishists will turn pale in a matter of seconds. However, I like this kind of sonic massacre, because it does not sound amateurish or false.

Summing up, the album is a little step forward for a formation that had already reached a good level before. Moreover, I have read that it finalizes the trilogy which begun with the debut. Therefore, it is possible that Murg will sail to new shores with their fourth work. With regard to their extraordinary potential, I stay curious.