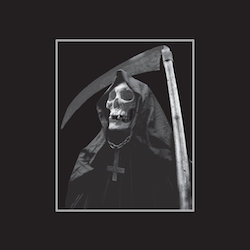 Canadian sect Death Worship follows up 2016’s widely praised Extermination Mass with End Times, a record that continues its quest to stomp out all human existence. Having heard brother bands Revenge and Conqueror, one easily noticeable difference of Death Worship is the production and less impulse-driven blade of their strike. Not saying End Times is not a savage record, it’s that maturity can be heard on this new spree of violence.

Tempo changes are still a thing on End Times which reinforces the idea of controlled musical barbarity. Black/death or "war metal" records this short mostly play at an uncompromising speed; but here, the pacing is mixed with groove laden segments, thus giving the compositions added layers of depth. Death Worship continues to use deeper carvings of harmony to prevent End Times from sounding like a perpetual wall of recklessness that some bands under the “war metal” moniker have a fetish for. Not that I would mind if they kept things more feral, as I prefer the more untamed showings of excoriation, but this works. However; coming off the momentum of a killer debut EP that was released in 2016, I was expecting a less approachable sound and a few more songs after such a long period of waiting, thus bringing to light Death Worship’s appreciation of quality over quantity. Yes, it's only 12 minutes’ worth of music, but the way the songs are constructed reflects that of an effort in which had been dwelling under significant surveillance and supervision throughout its development; thus, ensuring ideal results. Like scientists engineering a biological weapon of large-scale devastating effects; the Ross Bay Cult commanders ensured this entity underwent extensive examination, from zygote to embryo to warhead, no cellular incoherencies went undetected and untreated. Though borrowing elements from and putting to work the successful touch of Conqueror, the amendments made have proven to be anything but arbitrary.

Due to the record being so short, the memorable occurrences fly-by so fast you get the feeling something more is missing, like the cherry on top of an ice-cream cone. End Times gallops to the end so fast that you can barely savor some really talented moments heard from the opening track to the final entry. The replay-ability is there but solely relying on how many times you can endure something that races to the end without looking back. However; Death Worship delivers what has come to be expected from them at this level. With the rabid vocals acting in accordance with the hammering drums and paroxysmal guitars, the speeding rage rarely settles but can still be intensively felt on the groovier sections of End Times, as can be heard on” The Poisoned Chalice”. Plus with the production holding up so well, this short act of “war metal” aggression will satisfy the seasoned listener/supporter, but only for so long.

I would prefer if Death Worship adapted a more chaotic sound and muddled approach to the riff writing and guitar tuning; however, this audible polish is not that much of a turn-off; and that's all credited to the fantastic musicianship. End Times is a fairly short but quality effort by Death Worship, but after 2+ years since Extermination Mass, I’m of the belief that it’s a tease for something more to come later in 2019 (hopefully). We will have to be content with this besiegement for now; End Times crushes but I fear there is a second more destructive wave of nuclear radiation approaching.