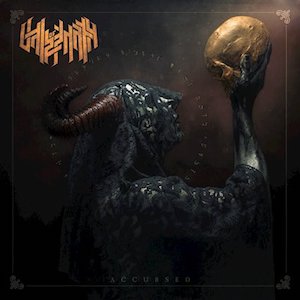 This truly is an evil only Satan can fathom.

I have never been too impressed by Vale of Pnath, I haven't listened to their debut but their second record, aptly named "II" was a fairly standard tech affair, but, to its credit, I do not remember much of it. I guess I'll have to revisit it in the future, because maybe my opinion will change on it. However, way back in the ancient pre-collapse of the world in 2019, they released a 7 (really 5) track EP that absolutely blew my fucking mind, and to this day is a constant listen of mine that gets my adrenaline all the way up. It's a ferocious, explosive and absolutely monstrous EP filled with brutal tracks that are guaranteed to melt your face off.

The core sound of "Accursed" is riff-oriented technical death metal, with a touch of black metal atmosphere and some djent-like riffs. Now, let me point this out; I fucking hate djent. I think it's pretty dumb and inane. That being said, I do not mind it when djent riffs make their way into death metal, so long as they're kept under control and don't appear too much. The ones that appear on this record, mainly the skull crushing ones that appear on my favorite track "Obsidian Realm" are used well, and make the experience surprisingly better. I'm also not too keen on black metal, but I enjoy them going for the black metal atmosphere and just infusing it with technical death metal. This definitely gives Vale of Pnath a little more flavor than what they were originally doing with their last album, and it makes them a more memorable name.

The five actual tracks, discounting the two pointless interludes, are hectic, bombastic, but still catchy. The music doesn't ever get too progressive or technical to keep up with, just a dash of it to make it more interesting. The hooks on this thing are ferocious and it's an EP I find very hard to not headbang to. The riffs are absolutely bone shattering and feel like you're taking an upper cut straight to the jaw each time they throw in a new one. Sometimes they're fast, sometimes they're groovy, but they're all well placed and never go on for too long - just how I like it.

I tend to like the production on pretty much every record I listen to, as I rarely find it to be a detriment to the music and I can always get past it if it's bad - but the production on this one is exceptionally good. Everything is tight as fuck, very punchy and everything has a nice, full sound that makes your headphones vibrate if you turn them up to max volume. It's pretty bassy, but not too bassy like you would hear on Equipoise's debut album. It reminds me mostly of the production you would hear on the little known Wounds debut EP "Light Eater." The vocals are pretty basic, opting for a high pitched scream with some occasional mids, but it's overall nothing special, as is usually the case with death metal. The rest of the band's performances are what you would expect from tech death, they're all masters of their respective instruments and everyone plays their parts very well.

"Accursed" is a fantastic EP, and one I think more people should listen to. It's short, straight to the point, and fucking brutal. It's the sonic equivalent of an 8.2 magnitude earthquake, feeling like the world is just crumbling down around you and this is the soundtrack to the apocalypse. It is menacing, chaotic and other adjectives to describe something that is mean. Even if you aren't a fan of technical death metal, you might enjoy this one as it doesn't focus too much on noodling and wowing you with how fast they can play arpeggios, and instead focusing on their riff construction. Devastating stuff here.