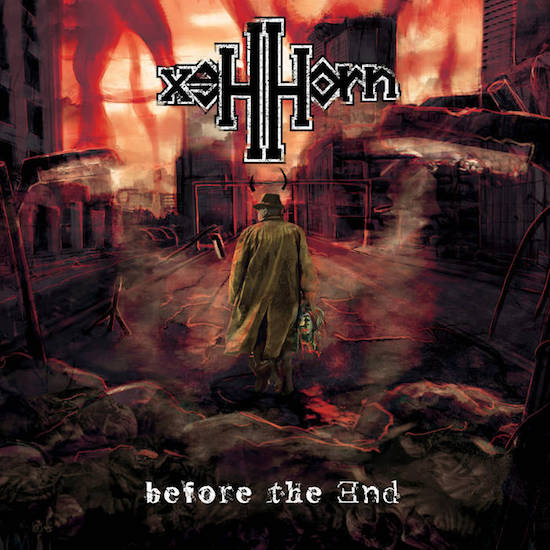 Buy on: Bandcamp
Type: Full-Length
Release Date: February 17th, 2019
Label: Mara Productions
Genre: Death, Thrash
1 Woodcarver
2 Craftsman Of Guts
3 Turn On The Lights
4 Vom
5 Follow Me
6 Up On The Scaffold
7 Blood On Gloves
8 Zeitgeber
9 Before The End
10 I Am Screaming So Loud
MetalBite on YouTube

My first take-away after having heard Poland's HexHorn sophomore full-length album Before the End is a good first impression. The material on here shows evidence of a true collaborative unified effort on all fronts. It's good to know because I was skeptical about the record before listening to it. I was expecting a modern overproduced trigger-filled output however, upon first listen I was happy to discover the music had an early 2000s production and sound approach minus the clicky drumming. Before the End is certainly one of the better finds of 2019, it's a modern take on the genre without erasing any of that organic feeling I usually look for when listening to death metal. I think that has to do with how trigger-less the drumming is, the candid lyrics and the guitar playing which exhibits a little bit of black metal, thrash metal, groove metal and memorable soloing (though few) with adjoining leads. I mostly associate Poland with quality black metal, though not limited to that genre, the region has been touting their expertise in other genres and HexHorn is a glaring example.

After multiple listens the recurring factor that I think stands in HexHorn's way as musicians is judging by their exceptional musical skills, my expectations gravitated to the point of ranking the material by the standards of "Follow Me", "Before the End" and "Screaming so Loud". Not to be mistaken at all, every song featured on Before the End is good and flows well hence the emphasized melodies; however, none appear to compete for the spotlight apart from the mentioned highlights, rather they all sit safely within HexHorn's competencies. Yes, the instrumentation is exceptional, but I think what's needed are additional moments that see the band climax from the safety of their skills, much like the ones mentioned, but more confidently. There's also the impression HexHorn has so much talent at their disposal to the point of not being entirely sure where their identity lies or which path they wish to take the music. Thus said, I think the band is merely experimenting (something I would reserve for a debut) in search of a dominant makeup. I think what they were really gunning for can be heard on "Before the End", that combines all the properties of HexHorn almost flawlessly. Swedish death metal morphed with war-metal-esque drumming that has fluid transitions in and out of black metal.

Though still a predominantly nonchalant effort from HexHorn, Before the End does justify multiple play-throughs; hence, amounting to be an above average effort. Should they find steady ground HexHorn could be among the leading names in underground death metal.