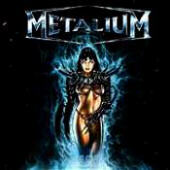 Germany and Power Metal are very much synonymous - as it was basically born, bred and fuelled there. I like Power Metal to a point, because of its dedication to being both amazing musicianship and big time power as well. Metalium is one of the more unknown of the German Power metal, getting not as much notoriety as Helloween did - yet here I am reviewing them so you know.

Born in 1998, these four guys sot to capture a spot in the melting pot that was the Germanic metal scene, and became something of a minor icons in the process. With nine albums and two well received DVDs, they have carved a spot in there homeland’s metal history and this recording ( "As One-Chapter Four") could be their best before or after.

I hear some very amazing playing going on here, as perfectly set out in the track 'Warrior', as the melody and power are perfectly fused with the strength of every member. Helloween is my favorite PM band, but this is holding its own. Too bad that it seemed as if the North American metalheads have past over this band for something else or home grown shredders. They do sound a lot like Helloween but they are more than just sound-a-likes... they are their own metallic beasts.

Sadly, this band called it quits last year and they all went on to different things. It is sad that they did not crack the market over here in both Canada and the US. They had a lot to offer in their music and passion, and I suspect that they have a hell of a lot more if they decide to reform. As it stands, they have left a legacy that all metalheads need to hear... and to enjoy.