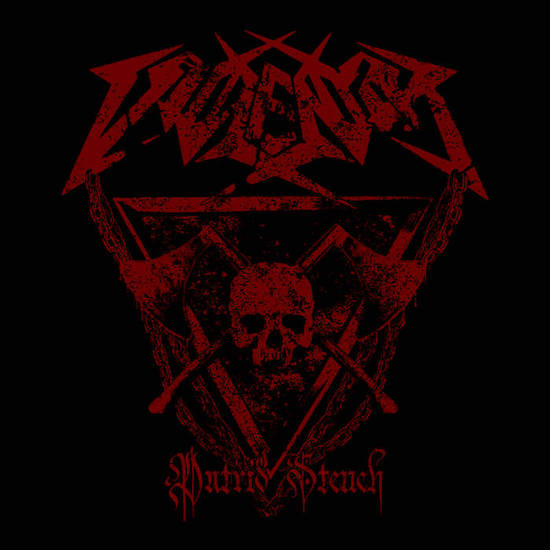 Roughly 60 years ago, Germans loved to visit Italy. After this tiny unconditional surrender, the Wirtschaftswunder had its first effects and so it was time to conquer other countries without having a machine gun under the arm. New experience! Sunny Italy was the first choice, but I bet that my ancestors would have selected another destination, if Violentor would have been already active. Their sound has nothing in common with a sun-drenched holiday.

Do you know at least one album of Violentor? Okay, good news, then you know them all. But bad news as well, you are missing some exciting tunes as long as you have not heard Putrid Stench. Although the general formula has remained untouched, the individual design is always new. The three-piece still concentrates on almost painfully simple songs, conventional patterns and a big portion of shabbiness. M-A calls the band’s style thrash metal, but I fear that dudes like Alex Skolnick, Kragen Lum or Jeff Waters beg to differ. Okay, Waters has to be quiet since the release of “Set the World on Fire” and further trivialities, nevertheless, Violentor’s style has a punk-driven core. Perhaps one can say they are more metal than Agnostic Front and less thrash than Testament. But come on, this review is getting much more academic than the music itself. Thus, let’s express it simply. Violentor give full speed, they love unembellished attacks and their narrow-mindedness is bliss.

Tracks like the aptly titled “Burning Rage” leave nothing but scorched earth behind, “Butcher the Holy Swine” is a whirlwind of terror and “Hunter of the Anorexis” wants to be an almost multi-layered track (but of course only in the context of the band’s remaining material). Despite the basic brutality of the compositions, the trio always has an eye on catchiness as well. Naturally, the musicians use very simple means to create catchy sequences. For example, the frequent repetition of a single line of the lyrics is not forbidden, right? The boozy and antisocial voice is an important element, even though the rabid guitars dominate the sound. Speaking of the sound, enjoy a direct and brutal production which scores with the right relation between dirt and transparency.

The partially blasts beat driven title track represents the authentic violence of the protagonists significantly. Violentor do not disguise their musical preferences – they are what they do and their music sounds like they are. This means it’s up to you to decide whether or not you like to have another dose of pure, straightforward aggression. Violentor will probably never reach out for the stars, but their down-to-earth mentality and their non-commercial way of proceeding just make fun. Maybe I should take a trip to Italy this year in order to see them live on stage.