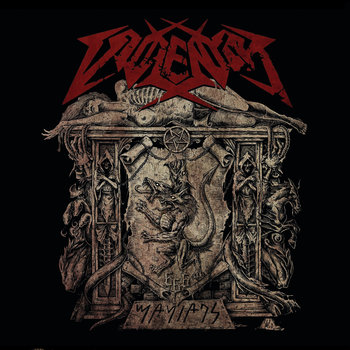 To be quite clear from the outset: Violentor are immune against melodies, technical subtlety and any form of progress. Imagine the archaeopteryx (this crude bastard between a dinosaur and a bird) of punk-infused metal and you know how Violentor sound. The minimalistic approach is totally focused on the essentials. Okay, the intro thought it would be a part of a horror movie soundtrack, but now the atmospheric piano tones ended up in the gutter. The rest consists only of hoarse vocals, swift guitars, stoic drumming and simple patterns. Tempo changes or breaks are useless bullshit for academic eggheads, Violentor still "like to thank NO ONE" and this attitude is exactly embodied by the music. Is this kind of metal predictable? Yes. But it also releases a great amount of energy and that's a good reason to enjoy it.

Do Italians suffer from a collective inferiority complex? Bulldozer called themselves "f**king Italians", Violentor sing about "Italian Bastards". Furthermore, one song on Maniacs is called "The Great Deceiver", but to my surprise, this is no cover version of the eponymous song from the debut of Bulldozer. Both formations rely on the classic three-piece line-up and their music spreads similar "f**k off" vibes, but there are no further similarities. Violentor just put the pedal to the metal and that's it. Ultimately, this means that everything stands or falls with the quality of the riffs. Fortunately, they work. Does Dan Lilker know this album? Guess he would love it, because the guitar work is not too far away from the early Nuclear Assault vinyls which offered some crossover elements as well. The metallic songs of The Exploited may also serve as a point of reference. Violentor feel comfortable between these legendary formations and their integrity is beyond doubt. I don't think one can offer songs of this quality without being a fan of this style, because it can't be great fun to play this rather primitive, limited and sometimes pretty repetitive music if you do not like to perform exactly this form of metal.

Those of you who like it easy and direct will bang your head, because most tracks hail primitiveness in a competent manner. Although the first regular song suffers from an ill-defined, ineffective riff, the album as a whole does not lack strength. Already the directly following pieces hit the mark. Despite their comparatively long playtime and their lean compositional formulas, both "The Power of Lust" and "The Great Deceiver" do not bore the listener. The fury and the drive of these songs blow the listener away. This can also be said about the further pieces. Especially "The Sign of the Cut" fascinates in view of its restlessness and, surprise, catchiness. Efficient song-writing meets a bone-dry and humorless mix - I have not much to gripe. Of course, Violentor will never be everybody's darling and they don't care. But the trio has a clear idea of its sound and it is able to execute this idea. So, who the hell needs technical tricks, egocentric solos or epic scenarios? Everything is fine as long as this Italian fossil does not change its style.