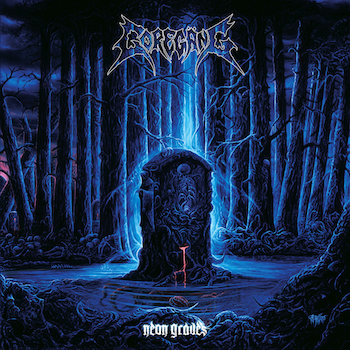 Goregang is one that plays a hardcore-ish style of death metal that major early Floridian death metal influence. Goregang’s debut album Neon Graves, and follow up to their 2017 EP, has caught my ear with their style; it's a way of mixing the aforementioned with a decent production quality. Clocking in at just around 35 minutes long, Goregang drools on the masses with a blend of thrash metal, some grindcore, hardcore and modern death metal. It's an interesting way of making a shout out loud in this ever-growing genre, one that continues to break boundaries and reshape the sound very often. More bands are trying new things to gain attention whilst others try new things in hopes of expanding the realms of the music minus damaging the blueprint.

What does Goregang do on Neon Graves that's worthy of being listened to? They play a fine form of blended genres. They use the crushing chugs of death metal long ago, the authoritative and opposing sounds of hardcore/punk and bring it full circle to create one that has to be viewed from an unorthodox angle to understand. The guitar work doesn't do anything new in particular but does raise the heat on Neon Graves. It's got teeth, this album but not on the technical spaces of the realm. It lies somewhere between the brutality of death metal and the rugged ligaments of hardcore/punk/thrash. Most songs are pure aggression whilst others take a groovy approach such as on “Spray of Teeth” which is one of the better songs on the record.There’s a potent brew of hardcore fidgeting amongst the death metal showing some of Goregang’s influences though not overriding the death metal it does show up radiantly enough to amplify the tone of the music along with the HM2 distortion. “Feeble Minded Rash” bring to mind a very early era in death metal, whilst “False Flag and Silence is Consent” tamper with the death metal by adding some hardcore/punk elements.

Thematically there’s much being discussed, spanning a variety of topics within the social spectrum, Goregang addresses some current day issues whilst still sounding heavy as the testicles of an elephant. Hate has its place and its adequately reserved and supplied on Neon Graves. It does grow tiresome after a few spins due to the lack of guitar complexity that as much needed on the record. The drumming also is very simple but struck with passion, so you get a good effect of its weight. Not hating on the record, but there is not much happening (for me) past “Plague Hammers” aside from “Putrid Judgement”. The remainder is like rough mixes of the 1st half which by now you would guess had better songs. This deter in quality is not drastic, but a strong 1st half usually calls for a 2nd that supports it. “Putrid Judgement” is arguably the better of the closing tunes, it’s a groovy thrash metal driven input that needed more guitar support in the form of some soloing. I think Neon Graves would have been a stronger record if “Spray of Teeth” and “Putrid Judgement” were used as guides.

The vocal work is convincing, growls bellow deep and the raspy barks are just on point and hit home to that thrashing death grind sound. Just wish there was more than chugging and power-chords to hold up Neon Graves. Apart from the negatives, Neon Graves is a decent record that will see some amount time spent on the turntables of hardcore fanatics.