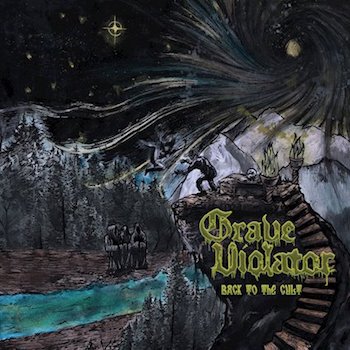 It was the artwork that tugged at my attention before I could sit and enjoy the journey ahead; looking like a scene straight out of a horror film, I could not turn a blind eye to this one. Finland’s Grave Violator exhumes a sleazy and violent body of desecration and twisted occult tales on Back to the Cult. Being their debut full-length album, Back to the Cult gives the listener clear insight into what Grave Violator are about. It's the kind of album that brings to mind the mid-80s thrash metal scene in terms of sound and production. This stretch of effort also gives off a nostalgic feeling of watching old low budget horror and gore movies of the 80s, a period in time that saw metal and fiction merge like hand and glove. This offering does justice to that moment in time, all the while using a first wave black metal vocal style to give the music a somewhat terrifying and sickening appeal.

For a black/thrash metal fusion, Back to the Cult achieves what I have found many bands to be lacking in; that being, keeping the listener in a tireless state of headbanging enjoyment. Grave Violator manages to execute this trick by maintaining a sense of urgency and debauchery through the steady pacing of the drumming, whilst in turn being helped by guitar riffs that seem to be chasing you through the record frantically. You are given this feeling from the beginning of Back to the Cult once hearing "Baptized in Filthy Semen". A song that appears to have a very dirty, ghoulish and hasty (in a good way) instrumental and vocal styling. Not only is the music racing in tone, but its lyrics (from what is clearly pronounced) comes across as having an urge driven by evil possession. This momentum is kept as the following song "Knife Fighter" builds on the vile nature of the recordings by using the same fast-paced vigor of the drumming and guitars that go well with the disgusting and sanguinary lyrics; and the vocals being disgorged, sound ravenous and do a great job of conveying the feeling of being pursued by a deranged murderer. Stop hoping for a breath, you won't get it yet, definitely not with songs such as "Ritual Humiliation", "Forced Flesh" and "Deliverance" that disinter perhaps the catchiest, aggressive and best guitar work on Back to the Cult.

The instrumentation on "Accusations" has a very Lucio Fulci-esque horror-flick vibe, as though it could have been used as an interlude for Zombie (1979) or City of the Living Dead (1980). This ominous break from the fast-restless thrashing, gritty vocals and lyricism is great, as it showcases horror movie-esque qualities. Like the period of calm before something horrifying emerges from the shadows of the night to restart its session of haunting whomever is unfortunate. This group of musicians know well what to do and how to effectively implement it. Plus given the run-time of the record being just around 33 minutes you feel as though you've partaken in the viewing of a short horror showing as a pretext for a larger bigger budget film.

And just as aggressive the music begins so does it come to an end. The same level of commitment and skill is showcased on the 3 final tracks succeeding "Accusations", in so strengthening my theory of possessing horror movie qualities. "Feed the Dead" is good but should have been placed higher up in the track-listing as to give the closing spotlight to the final track. Hence said; "Chamber of Demons" being 7 minutes long does a fine job of amalgamating the music on the record by providing a climaxing atmosphere; as if approaching the end of a horror tale eagerly and suspense fully awaiting the final outcome of the events. It displays the need for thoughtful instrumentation; given the way in which the guitars are played, in feeding a sense of impending terror as every action henceforth could determine one's fate.

For a debut album Back to the Cult is a good effort that insists on poking at the nostalgia of the listener. It's a promising album that compels one to remain attentive for what Grave Violator has to offer in the future.