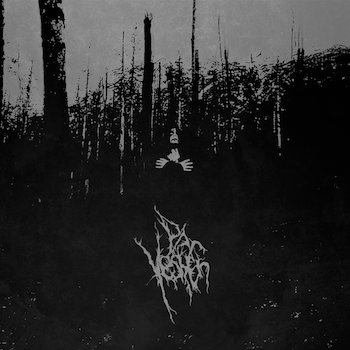 Pa Vesh En has arrived for some springtime abductions and testimonies. No one does it better than the cryptic figure often seen in the open landscapes and murky alleyways. Just last year we were gifted with a demo, an EP, a split with Temple Moon and a demented full length Church of Bones, all of which displayed raw black metal in the vein of a disciplined, calculated and ornate beast; the kind that attires himself in the pride of knowing he will be able to reproduce something of significant impact. We have had many come before Pa Vesh En, but they never seemed to leave a lasting impression, they appeared, copied each other and were forgotten easily. I'm afraid to say it but the monster before us will be within our perception and lurking in our minds on an ever-frequenting basis. It's late spring early summer and the atmosphere is just right for a glimpse into what nightmares Pa Vesh En has been conjuring in his hideout.

Pa Vesh En revisits an old relic, reminisce about how it all began and documents his emotional states as he sits in nostalgia of the desecrated. Cryptic Rites of Necromancy takes you there, to witness the methodical process responsible for summoning the will to destroy and deplete what is not yours. The 4 items on here sees the beast undergo a series of feelings before committing the formidable acts. A profound moment in the movie Houses that Jack Built is brought to mind; one in which the main antagonist described the phases he must surpass before indulging in his vile practice. Depression is mentioned as an important factor that propels his sickness, this state of being is represented on the final track “Entwined with Snakes”, it somehow portrays a struggle to restrain the impulsive urge but to no avail. It's short lived rebellion that only creates an urgency to escape periodically via committing oneself to the cycle.

These states are encouraged and applied to the grave madness of Pa Vesh En. Not to be mistaken, this does not appear to be a depressive act for the most part but does utilize some means to express such alongside his glaring contempt for those that shuffle by daily ignorant to the world parallel to theirs, yet opposite in principles. Cryptic Rites of Necromancy takes you through a short but profound journey through the mind of Pa Vesh En, only 12 minutes of music, yet the session slightly lifts the curtain to offer a peek into how and why he does what he does. The thing about Pa Vesh En’s music is its provoking aura, the effect of casting a wound on either one's own self or someone else, letting that wound heal only to reopen and fondle with it in a perverse way. Like to refrain from smoking or drinking or whatever but revisit it and lay in its comfort. The effect is so potent as such is the case with “Witness to Ceremonial Witchery”, that one cannot help but to think of past time obscene pleasures; long gone but left behind an insatiable yearning.

The production this time around is thicker and more bassy than that of before, it helps in adding memorability to the songs. Though just a few entries, it still outshines what others have done with more material. He always gets his message across even with the least amount of time. His voice goes in accordance with the varying guitar accentuation that either express melancholy or aggression. Don't be mistaken, this is not “dsbm”, Pa Vesh En’s material is evil in nature, the mournful sounds are but a tool used to support the insinuations. The music on Cryptic Rites of Necromancy is a call for dark introspect, a soul being chased by a once relished parasite longing to rekindle with a mephitic fixation.