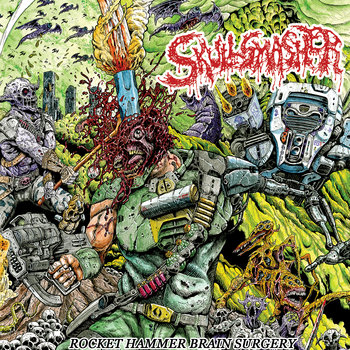 16 tracks in almost as many minutes, so you bet your sweet ass that this is grindcore.

The very first name that pops into that soft brain of mine is Repulsion. Short songs that have frenetic blasting savagery, slow stomping sections and more thrashier beats alternating throughout, with the guitars buzzing their way to the end with punkish energy, it has "Horrified" written all over. One could hardly call it a surprise move that Skullsmasher covers "Festering Boils" here, cuz all this sounds very familiar indeed. Put a dab of old Napalm Death on top of it, and you have a pretty good notion of what Skullsmasher sounds like.

But to call them a complete rip-off of Repulsion (or Napalm Death) would do them a disservice, because the band does bring some original ideas to the table. The growling dual vocal attack Skullsmasher employs here manages to give this album a bit of a feel of its own, with another cool twist being the black metal-ish riffing in "High Altitude Saturation Bombing". Another track worth mentioning is "Mobile Armor", where we get some dissonant riffing that kinda conjures up a death/grind version of old Voivod, which sounds great. I would not have minded if this had been utilized more throughout.

Music-wise I enjoy this quite a lot, so it is kind of a shame that the production is on the "meh" side, it just sounds too nice for this sort of death-flecked grindcore. If the guitars and bass had been given a place more up front in the mix, this would have hit a lot harder, because this sort of stuff needs that extra "oomph" to really blow up. Death/grind like this needs to pummel you senseless to really drive the point home, something comparable bands like Cretin or Sublime Cadaveric Decomposition understand through and through. And while I'm at it, that last track just fucking sucks and adds absolutely nothing. Good thing it only lasts 18 seconds.

This is a fun little package of death metal infused old school grindcore, that is unfortunately left behind somewhat by the lackluster production. If Skullsmasher would come to a follow-up album (and I definitely hope they will) and they resolve this small error, I assure you, they're going to create something that is going to take heads clean off for sure!