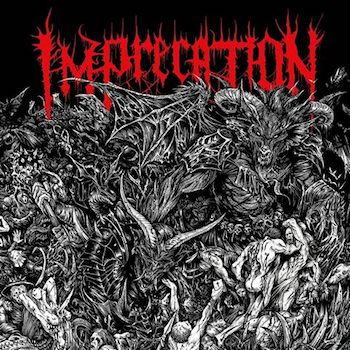 For a death metal band Imprecation sure does know how to make black metal philosophically. Like a coiled snake, Damnatio Ad Bestias settles and waits for the best opportunity to strike. Once the venom sets in, you're slowly swallowed and diminished by this serpent. Imprecation is one of those bands that possesses the skill to capitalize on the listener/s fetishes with their muscle pumping and apprehensive sound. Being amongst one of the first bands I was introduced to when traversing the darker corners of metal, Imprecation easily attracted me with their imagery and hateful lyrics. They're one of those death metal bands that does black metal the way I had always imagined and wanted it to have sounded. To my liking, 26 years since their first body of blasphemies and devil worshipping, Imprecation has kept the black oath in this new egregious decree.

Consider Damnatio Ad Bestias a continuation of 2013’s Satanae Tenebris Infinita; only this time more dexterously administered. Knowing Imprecation’s means to achieving their demolishing sound; with that groovy, mid-tempo, mid-paced throbbing making yet another return; the band amplifies that habitual routine by implementing altering time signatures in addition to the war metal-esque blast beats and the returning synthesized choirs heard in the background. This widens the passage for a greater technical showcase of the guitars, though only used when needed and to great effect. Apart from relying on their tried and true formula, Damnatio ad Bestias features a stronger sub-current that remains leeched to the music for its entirety. These recurring under and overtones suffix the instrumentation turning each song into an eventful experience of blasphemous absorption.

If you've ever heard and fell in love with the Jehova Denied demo that was released in 2012, then prepare another love-letter for Damnatio Ad Bestias. It has almost the same production as was featured on Jehova Denied; I say almost because the overall musical tone is rather cloaked in suffocating lo-fi devilry, in so giving the album a chiasmic impact that augments the ritualistic vibe of the keyboard synthesizers. This is one that rides out the atmosphere through the enriched rhythmic pitches, whether it be blast beats or slow churning guitar power chords that dominate any particular section, the state of the music feels like a continuous weight being accumulated whilst a candle wick burns low dimming in luminescence as time goes-by. Songs like the opener, “Temple of the Foul Spirit”, “Damnatio ad Bestias” and “The Shepherd and the Flock” provoke a sense of movement which is a testament to Imprecation's expert use of dragging tempos, riffs and synthesizers that pile on top each other only to come crashing to the floor in forming some meaty and clobbering breakdowns.

Damnatio ad Bestias is draped in the slushy, cumbersome style of doom metal that goes perfectly with those gloppy yet roaring death growls. It's adept the way Imprecation handle the rhythmic modulation on the record, everything fits and displays a connected harmony. The leading riffs are supported with stellar guitar soloing when presented and adds a reinforced layer of compositional acuity; man, the record never shows weaknesses, heck, the warriors behind the artillery are way to knowledgeable and dedicated to attract failure.

Salvage this latest script of sacrilege if you possess the means to do so. Imprecation's Damnatio ad Bestias whistles uneasy wickedness in the ears of all willing to listen.