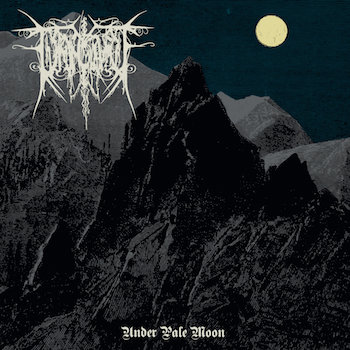 Under Pale Moon is the debut album by the new project Ringarë. Have I said new? Well, in fact it’s not by any means a new project. Ringarë was created as a continuation of the long-time inactive band Ringar, which was founded in 2004 by Esoterica and Anomalous in Nashville, USA. The duo recorded tons of material for the first effort, which was never released. Some of those compositions were used for Chaos Moon, a side project of Esoterica, while many other creations where laid in rest in shadows. Fortunately, the obscure creature that Ringar was, evolved and resurrected under a new moniker, Ringarë, now with a new member known as Likpredikaren, who takes the duties of the vocals. The reinvigorated duo took those old creations and some new ones and started to record the never born debut album. After months of work and courtesy of the underground label Iron Bonehead Records, 2019 was the year when we could finally taste what the musical vision of those members had to offer. But don't be fooled by the calendar, once you start listening to Under Pale Moon you begin a time travel back to the '90s.

Under Pale Moon could have easily been released alongside classic works like Emperor's debut, Dimmu Borgir's "Stormblast" or Limbonic Art's imperial debut "Moon in the Scorpio". As you can imagine, based on the aforementioned influences, Ringarë’s core sound is an undoubtedly synth-drenched black metal with the distinctive raw production of those old creations. But this first opus has perhaps a more drowning and underground sound, which perfectly fits the monumental and long four creations which conform this impressive debut. The keys are perfectly audible, but they have the necessary subtle nuance not to be overpresented while they are accompanied by the guitars, screams and drums. Anyway, there are moments where the synths have their own moment to shine between the vast darkness, like it happens in several moments of the album. Just listen to the immersive experience that the closing track 'Through Forest and Fog' is, where those keys transport you to an ancient castle in a distant realm. This truly hypnotizing and spectral section is also accompanied by some fuzzy guitars, which add a tasteful touch of rawness but without destroying the ethereal and mystic experience. Ringarë surely knows how to mix ferocious sections where the guitars play a major role, while Likpredikaren’s classic yet excellently executed shrieks give us goosebumps, and calmer parts, where the mighty keys have always a distinguishable and excellent melody, which make those memorable tracks even better. All the compositions flow between these aforementioned different sides of Ringarë’s sound with a tasteful naturalness. This aspect makes clear that both members have a remarkable talent to create very well composed songs, which is obviously essential to create a ripping work.

The most obvious conclusion with Ringarë's debut Under Pale Moon is that the wait was worth of it. This is an excellent debut with purely dark yet truly beautiful and majestic compositions, where the keys play an essential role. Anyway, the compositions themselves are excellent with the classic raw and hypnotic aura of the '90s, which I always welcome.

Second wave black metal has had its time, though being filled with many great albums the genre grew tiresome due to many songs lacking identity as many bands imitated each other not just aesthetically but composition-wise as well. Blasts beats were anchored by a telling tremolo picking and sparing screams and shrieks. Keyboards were very much a thing that many who loved the genre despised when being incorporated into black metal. This was the catalyst for a massive spawning of atmospheric metal acts further blurring the borders of the genre. However, amidst the thick fumes of genre labeling, today we see many bands adopting the synth effect to deepen the composition structure. Though iconic projects utilized the this, they were considered "fathers" and “cult” of the sub-genre thus being immune to the negativity. That era slowly dispersed with the approach of the 2000s; but as of recent there seems to have been a resurgence, with bands the likes of Vargrav and Disciples of the Void manufacturing music that fills the void of the nostalgic, those who dwell in a state of un-moving time. Joining those mentioned is Ringarë, in so reigniting and refueling the torch of the 90s flame in a imagination of the era with a heightened emphasis on dreamy melancholic keyboards and textbook passion oozing vocals.

Ringarë channels a piercing daze into the mystery of the night with Under Pale Moon. The potency of the atmosphere built is unbelievably consistent, so much so that the artwork is mentally animated during the time listening. Under Pale Moon’s atmosphere is so strong that it could change the outlook on a 90-degree sunny day. An atmospheric metal masterpiece this is, casting away the light leaving you at the mercy of only the darkness and its accomplices. Those keyboards will have you contemplating the eternal, the vocals spawn a sonic spell of serenity all the while peeling away the dried, dull paint of modernity. The primitive ambient style many bands within the sub-genre are going for has been receiving positive feedback for the most part, perhaps that's a result of the crispy clean production that you get from bigger labels that wipe away the mystery of the music.

Ringarë touch teases a tribal rudiment time when music, musician and nature were all attached to each other. The self-titled opener builds into a scenery of majestic depths, it's keyboard driven lead never gets old, even the slower parts weave into the atmospheric skin of the record. The keyboards and vocals are really the stars of this particular showing, as you may have heard “one good turn deserves another”, hence the musicians supply each other with that commending sparkle from time to time. The middle section of “Through Forest and Fog” is like diving deeper into a valley of dark and beautiful mysteries, then swimming out with a net full of treasures you discovered at its depths. Such a beautiful little section that invites and wraps its listeners with mammoth waves of passion and affection that ensues a sharp harsh vocal tone. And with the production sounding like it was all recorded in analogue, that raw organic feel lingers on every note played hence magnifying the mysterious molding of Under Pale Moon.

Although the material is about 45 minutes in length, the songs are different from each other, they possess their own unique attributes and structure. It's not one of those albums in which every song is identical to the last, sound-wise, rather, it's all thematically connected. By toning down the guitar’s Ringarë created room for the keyboards to take control of the music. With the vocals appearing scantily, the guitars also get the opportunity to grow on the record in contributing a soulful presence, one that listens and supports the synth like an embryo being nurtured in a cocoon. This turned out to be main factor contributing to the record’s success. It's a fantastic album that can easily be passed off as an early 90s treat. I read something pertaining to the release of Under Pale Moon which stated the material is really a collection of music that was intended to be on a Chaos Moon record but never did. This in some way adds to the mystique nature surrounding this recording. Overall preparing a well packaged product that teases the listener.

Under Pale Moon is a gutful wholehearted ode to the ancients, one that worships the antiquated humbly in its abode of prestige and prosperity. This is top of the line material, I would not be surprised if a split is composed sometime with the likes of Frostveil, Vargrav or Eldamar all of which have proven to be deeply inspired by the wave of 90s synth driven black metal.