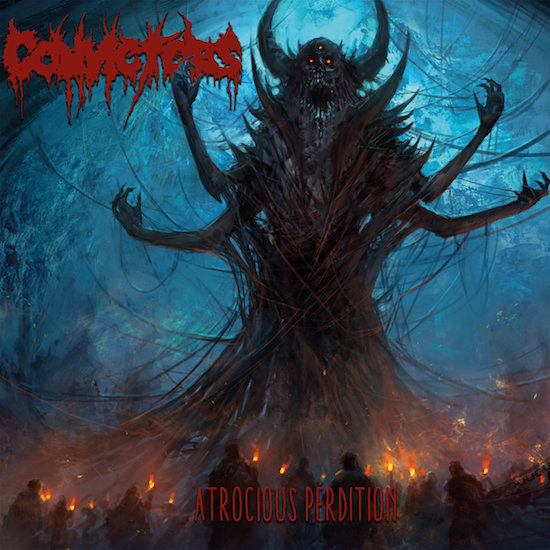 At first glance at the artwork on Convictors sophomore record Atrocious Perdition, I was expecting to hear music with a shit ton of triggers and an overly crisp production or a deathcore record. However, after sitting through 31 minutes of it, I was pleasantly surprised to find that was not the case. I usually put artwork like that on the suspect list, not that I don’t find admiration in the image or the effort put into creating it, just happens I’ve experienced bands in the past that front a colorful cover with brutal looking depictions, but when the music (‘music’ in the most loose sense) begins to play, a migraine builds. Convictors whom hail from Germany stands clear of that pattern, they prove that they have the proficiency to manufacture a record that not only looks bad ass but sounds the same. Regarding the sound of Convictors’ Atrocious Perdition, one might say they play a form of Swedish death metal in the vein of early Entombed and/or Carnage with a bit less thrash metal accentuation all on a modern-day production. The Entombed and Carnage sound of Atrocious Perdition was enough to gain my attention, plus having seen and heard good words about Convictors’ debut Envoys of Extinction, I was more than delighted to listen to what this latest entry from the German quartet proposed.

The output on Atrocious Perdition is good especially for being a record that bares resemblance to the Swedish death metal scene of long-gone days, as it's ever so easy to give an impression of being routine when creating music of this sort that thousands of bands have done before. Even though it’s evident there's nothing remotely new or revolutionary transpiring, Atrocious Perdition adheres to a tried and true formula of death metal, I've heard quite the lot wearing their influences proudly like badges, but rarely or never succeed at producing music that embraces the ethos of those idolized. Not the case here, “Withdrawn”, “Fading Epitaph” and “Criteria” all do justice to that era of death metal whether it may/may not have been intentional, while other entries on the record offer support to the end product. Tight musicianship calls for reward and here on Atrocious Perdition, Convictors bring the tunes. The vocals, instrumentation and lyrical construction comes together well, therefore creating an impression of completion even for an album lasting barely over 30 minutes. Existing with the realm of modern Swedish death metal, it’s ideal timing hence HM2 distortion can become fatiguing if not properly managed. Atrocious Perdition is not the most technical but where Convictor’s exceed is within the groove and bridging leads of the allied drumming and riffing while being rode by roughneck throaty growls and grunts.

Fans of the bands mentioned should find some amount of enjoyment on Atrocious Perdition, again, its nothing new, but has an unfeigned quality within its genre.