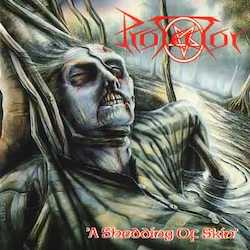 The guys of Protector had never the reputation of being messengers of a relaxing or harmonious style of music. Right from the beginning, they wanted to demonstrate their resistance against any form of anti-metallic effeminacy. We thought they had reached their maximum vehemence with their first albums. We were wrong.

A Shedding Of Skin attacked all your senses. It seemed as if an overdose of adrenaline was running through the veins of the three musicians during the recording session. Nevertheless, the band had come of age. Protector did no longer belong to the juvenile noisemakers of the German thrash scene. You will not find one iota of naivety or unconcern. The formation was still highly motivated and acted very vigorously, but their almost adolescent thirst for action was combined with a terrifying serenity. Due to the experience gained so far, Protector designed a full-length that worshipped the craggiest side of thrash metal. Death metal influences as well as a certain affinity for hardcore showed up and led to a very edgy and misanthropic appearance of the songs. The hyperactive band mixed everything in order to create a repulsive bastard of extreme metal. And this bastard did not have a German DNA anymore. A Shedding Of Skin emanated an international flair. Typical Teutonic stylistic devices like stomping rhythms and hymnal choruses were out of scope. Instead, Protector crossed the border in order to start a mission of destruction.

The intro was nothing else but the calm before the storm. Directly afterwards, the ultra-fast 'Mortuary Nightmare' broke the silence in the most brutal manner. Without any harmonious elements, the song raced along the highway of extreme metal (of course, no speed limits far and wide). The unleashed drumming of the last founding member, Michael Hasse (R.I.P.), was confusingly similar to the blows of a wrecking ball. Additionally, the violent vocals of Olli Wiebel did not give a shit about any aspects of variety. The majority of the subsequent tracks followed an analogical structure. While blowing the last particle of dust out of your ears, the title track, 'Retribution In Darkness' and 'Face Fear' continued the musical amok run in an imposing way. If you want to be kissed by the power of sheer franticness, the aforementioned death / thrash monsters can make your wish come true in a matter of minutes. These outbursts of anger shaped the general impression of the full-length.

Due to the blatantly aggressive approach of the formation, I do not think that the three live wires tried to generate very smooth breaks. But if they did so, they had not been successful. Just listen to the punishing 'Whom Gods Destroy'. Its breaks had the charm of an accident. Imagine a car that drives at full speed against a massive wall. But instead of falling apart, the vehicle is surprisingly still functional. Its driver just smiles and continues his wild ride while choosing another direction. We, the beholders, are totally astonished. Anyway, in the case of Protector, the abruptness of the breaks seemed to be intended and this was remarkable, but neither good nor bad per se.

Contrariwise, the exceptionally slow-moving 'Tantalus' did not need any breaks. It crawled forward like a poisonous snake. The heavyweight tune was a welcome change after having survived the majority of the high velocity bullets. Its tough main riff appeared as the sonic opposite of clemency. In particular, its bridge impressed with a controversial mix of morbidity and catchiness. Unfortunately, this powerful bulldozer marked the last highlight and the following regular numbers as well as the bonus track were of lesser quality. However, A Shedding Of Skin could rely on its solid sound and was a pain in the ass of every poser - and its best tracks like 'Thy Will Be Done' have withstood the test of time with great ease. The guys that represent the band in its present form have not yet released a full-length of the same quality. Martin Missy and his Swedish fellows will hopefully accept and master this challenge.