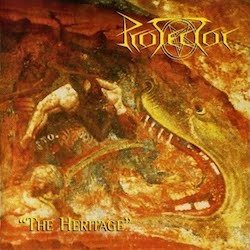 In the early years of my interest in heavy metal, I always found it peculiar when, as in the case of Motörhead, only one original member remained in the line-up. That wasn't a real band at all! Or was it? Well, I had just got used to such constellations when Protector - even before Venom! - managed to record an album with a line-up that had no overlap with the musicians of the first official release (Misanthropy). Of course, personnel instability also indicates musical unpredictability. Olly Wiebel, the new strong man at Protector, at least felt obliged to the band's heritage and the legacy of Michael Hasse (R.I.P.), who died much too early, to the extent that there were no fundamental changes in the sound after A Shedding Of Skin. However, the borders to death / thrash were explored more than before. This was expressed in partly completely absurd speeds. The new trio often rushed through their songs as if they feared their predecessors were chasing them to steal their instruments. On the altar of absolute harshness, even the catchy elements that A Shedding Of Skin had in parts were sacrificed without hesitation. As a result, the album, appropriately titled in view of the changes in persons and the death of Hasse, sounds relatively flat at times. The new Protector do not succeed in burying themselves permanently in the listener's memory.

It so happens that a rather atypical, almost groove-oriented piece provides a small highlight on The Heritage. 'Convicts On The Street' rocks through the prairie in mid-tempo until shortly before the end. Of course, it can't be done completely without high speed, but at least Wiebel and his colleagues show for once that they at least have an idea that a chorus with recognition value doesn't have to be a mistake. This laconic remark is not meant to indicate that the rest of the album is for the barrel. At the beginning, the absolute vehemence also has a refreshing note. 'Mental Malaria' opens the album well and coherently. Furthermore, it transports an anarchic punk note, which has always suited Protector well from time to time (think of 'Space Cake'). Over the length of an entire album, however, a uniformity spreads that does not inspire pressing the repeat button on the CD player. Even small moments of surprise like the solo performance by drummer Marco in 'Chronology' or the solid, Living Death compatible, instrumental 'Palpitation' only help to a limited extent.

The Heritage lacks the power of A Shedding Of Skin and the haunting element of Golem. Equipped with a solid, but by no means excellent production, which could unfold a little more pressure, it is nevertheless an acceptable disc, which in any case does not lack authenticity. Protector drove a remarkably rigorous course here in 1993 - Kreator had released "Renewal" a year earlier, which almost says it all. So, there may well be reasons for speed fanatics to rediscover The Heritage for themselves. Especially since the 'Outro' is so wonderfully stolen from Slayer's 'Hardening Of The Arteries' that you have to admire the band's audacity at the very least.