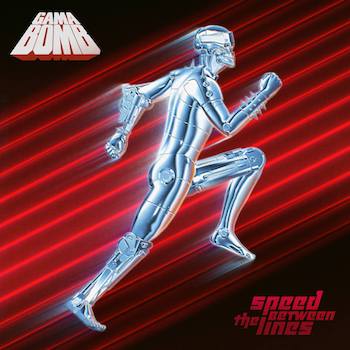 Gama Bomb, the more or less only band which is able to add successfully a funny note to the mostly very serious metal scene, have thrown a new album on the market and it goes without saying that loyal supporters like me have to buy this output. Untouchable Glory and in particular The Terror Tapes have been extremely strong predecessors and so the bar is set high. Speed Between the Lines stands to these formidable works like Priest's terrible "Turbo" stood to the mighty "Defenders of the Faith", only exactly the other way around. This means that the Irish quintet has absolutely nothing changed in terms of style. I understand the pun of Speed Between the Lines (hopefully!), but honestly speaking, the last three words of the title are actually superfluous. The musicians still focus on speed, speed and, finally, speed. And this is great. Nobody needs doom metal under the banner of Gama Bomb - and the same goes for "nu metal", "metalcore", rock ballads and further shit. So, all of you who are familiar with the previous records of the protagonists do not need a further description of the here presented style.

An important fun factor is the voice of Philly Byrne. One can see his ironic twinkle in the eye while he is singing and interspersing the almost surreal high-pitched screams. In its best moments, his voice is nearly somersaulting. Fortunately, I have seen the band live on 28 November 2009 in Gießen / Germany (time flies...), otherwise I would doubt that Byrne is able to perform the lyrics on stage flawlessly. By the way, I regret that they did not print the lyrics in the booklet - I guess that a lot of non-native speakers like me miss a lot of fun. Instead, they have created film posters / book covers for every song and, of course, "Alt Reich" shows a sadistic Nazi who kicks a beautiful naked woman. Come on guys, it's getting boring. Isn't it time to use another German stereotype? What about Sauerkraut, Lederhose or - if you must have a link to the Third Reich - the Autobahn?

In terms of music, "Alt Reich" marks a representative song. Conventional configuration, never chaotic yet ultra-fast verses, a catchy chorus with effective background shouts, a straight pattern without any frills and very strong riffs, leads and lines. In other words, this is almost a one-size-fits-all description. The songs are extremely homogeneous, even the minimalist caricatures of a metal song are missing this time, remember "epic" tunes such as "Mussolini Mosh" or "Shitting Yourself to Live". Highlights like "Give Me Leather", "Bring Out the Monster" or "Motorgeist" do not stand in the shadow of their previous killers, even though classics like "Beverly Hills Robocop" or "My Evil Eye" might be one step ahead. Guess it's just a matter of personal taste, because one thing is certain: absolutely no fan of the former songs will be disappointed. The most important features, the musicianship, the crispness and the momentum are still very present and no track falls by the wayside. In addition, the tightness of the dudes is remarkable. The stable line-up - there have been no changes since 2013 - seems to have a positive effect.

As said before, the group did not modify its restless style in any way and the production offers no unexpected facets as well. The album sounds clear, vigorous and direct. Everything is well-balanced, and the music develops the necessary pressure. The only negative detail here is the absence of "Return of Easter Rising", the B side of the "Give me Leather" single. Once the band surprised us with a download of a complete album ("Tales from the Grave in Space"), now they want us to pay extra for less than three minutes of music? I admit, that's no drama, but I don't think that the album would have been overloaded by addition of this song. However, that may be, the album is much too good to deserve a review with a critical last sentence. Thus, my final statement is that Gama Bomb can be described as the non-serious counterpart of Toxic Holocaust, but they write better tunes than the man with the bleached mop on his head. And inter alia due to this fact, they belong to the bands that give the thrash metal community what it needs: very good, fast and refreshing songs which come from the heart.