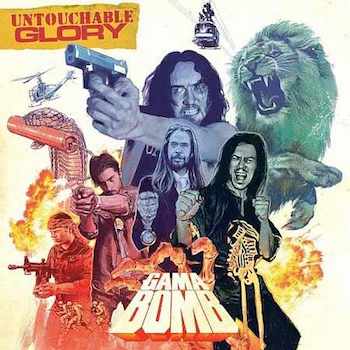 Ah, the crazy gang from Northern Ireland has returned. Fun thrash is usually not my metier, but there is no rule without an exception. Gama Bomb's last album was stuffed with an almost unhealthy overdose of killer riffs. I was therefore eagerly awaiting the here described work. Untouchable Glory does not want to be the lukewarm afterburner, although it is always very difficult to write an adequate successor of a 95%-album. To anticipate the result: the here presented album cannot fully compete with The Terror Tapes, but this is no problem at all. Thousands of bands would be happy if they were able to write an album of this quality.

Gama Bomb have found their own style. The terrifically rapid guitar lines show that it is not impossible to combine an easygoing atmosphere with sharp and furious riffs. The songs come to the point in a very straight manner and make clear that the Gama crew hates attributes like pompous, monumental or overloaded. It comes therefore as no surprise that the tunes are reduced to the essentials. But this does not mean that the band is at risk to deliver a one-dimensional album. Gama Bomb has enough ideas to keep up the tension and variety does not also come off badly. However, this is not the greatest advantage of the album. The crucial factor is that the band hates any form of phlegm.

Compared with this five-piece, hyperactive children are in danger of being blamed for lethargy and lameness. The liveliness of the group and the high energy level of the album know no boundaries. In terms of velocity and dynamism, Gama Bomb takes off and only the sky's the limit. But while other British bands prefer to fly with a rather ordinary airplane (Iron Maiden) or a bomber (Motörhead), Gama Bomb sit in a light and airy glider. Their long hairs flutter in the wind while they greet from high above. Thank God, they are not at risk to lose their clothes. The guys have tucked their t-shirts in and exactly the eponymous song combines their slightly absurd humour and their talent for writing dynamic compositions. Casual verses meet an highly explosive bridge and the chorus shines with fast lead vocals and supposedly authoritarian shouts of a gang in the background. A very good, but not a typical track, because the majority of the songs avoids restrained parts while putting the focus on high velocity exclusively. 'Evil Eye' is a fantastic example for the band's typical approach. Do you like energetic and precise thrashers such as, for example, "TEAMxDEADx" from Dr. Living Dead? This kind of compact songs without a gram of fat? In this case, 'Evil Eye' will be your sonic Eldorado. But Gama Bomb have more aces up their sleeves. The rapid 'Witching Mania' does not only score with its blazing chorus and 'Drinkers, Inc.' is another high velocity tornado whose fanatic riffing invites you to an almost suicidal headbanging session.

Although Gama Bomb love songs at lightning speed, they do not forget to show further characteristics that push their pieces on an outstanding level. A simple "Hu" and a likewise simple "Ha", this is all that is needed to lend the opener a slightly moronic yet funny appearance. Maybe you are familiar with Lawnmower Deth's "Umph Umla" - Gama Bomb seem to like the aura of this song, although they prefer a more subtle form of humour. Apart from that, the average velocity of the song gives no reason to cry. 'Avenge Me!', to provide another example, offers a short mosh part at the end and due to these gimmicks, Gama Bomb have written another thrilling full-length. Its twelve songs are equipped with charismatic lead vocals, the production combines cleanliness, pressure and sharpness in a special way and the overall impression indicates a good atmosphere within the band. Indeed, Gama Bomb is a group with a relatively stable line-up and the guys feel comfortable while playing their specific kind of thrash. It seems to me that both the exceptionally designed booklet and the yellow disc are just further documents of their specific kind of humour. Anyway, lend an ear to highlights such as 'Raging Skies', another high speed torpedo, and see for yourself.