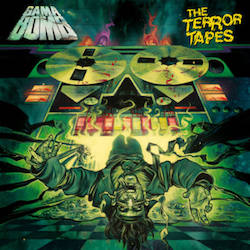 On the one hand, I do not like very much these fun metal bands. They think their lyrics are jokey, but usually they are just idiotic, stupid and, in the worst case, sexist and imbecile. On the other hand, I have to admit that some of the "serious" outpourings of many metal bands piss me off, too. Just think of the embarrassing poetry of bands such as Manowar or Sabaton. Thus, I appreciate less serious lyrics from time to time. (And to be honest: some songs of the here presented full-length do not dramatize funny topics.) However, it's always a question of the music in which the more or less amusing lyrics are embedded. Gama Bomb's first albums were pretty nice without having the chance to enter the hall of fame of my private collection. But The Terror Tapes is different. Firstly, I was worried because of the album's name. I thought that they would publish some clumsy rehearsal tapes in order to make a quick profit. But the all clear can be given. We are talking about twelve brand new tracks. And the best is yet to come, these infectious thrash metal masterpieces will make your head bang.

Although The Terror Tapes already represents the fourth full-length, the Gama crew has still the charm and the boyish recklessness of newcomers. The musicians give full speed and perform the majority of the songs in a breathtaking velocity. While keeping an eye on catchy choruses ('Terrorscope') and stirring bridges ('We Started the Fire'), they do not neglect the basic principles of thrash metal. But it gets even better. The album delivers more than a handful of highlights. But even if compared with the other killer tracks, two dizzy eruptions stand out. The extremely fast 'Beverly Hills Robocop' shines with stormy riffs and hilarious lyrics. Inter alia, the mentioned robot contributes four lines. Regardless of the fact that he has been killed, he tells us that he wants to "party like it's 1985". Fantastic idea, I want to be a teenager again. Lead vocalist Philly Byrne has also great intentions and wants to murder his boss. Isn't that what we all dream of? But I do not want to waste many words about that. Maybe my boss reads this review in the distant future. So let's focus on the second brilliant tune. 'The Cannibals Are in the Streets - All Flesh Must Be Eaten', also extremely fast performed, does not only score with its conclusive title and the expressive lead vocals. Of course, the raging riffs build once again the backbone, but you should also listen closely to the song's fantastic bridge and its unsurpassable chorus. You will recognize some of the most dynamic guitar lines ever.

Despite the musical hurricane, there is still time for wise advice. "You must take a shit in your trousers or you will never see your family again." Okay, now we know exactly what we have to do - or what we have to avoid. I guess, it depends on your family. My decision remains a secret. But let's go on to the next point, because maybe my wife also reads this review in the distant future.

Two short comical yet thrashy outbursts demonstrate that the buffoons from Northern Ireland are still not afraid to break with the conventions of the genre. However, they are intelligent enough to offer only two of these caricatures of a thrash song. Other tunes like 'Backwards Bible' also possess funny elements. But they do not focus exclusively on tomfoolery so that the album works as a halfway serious output. This is also due to the flawless sound of the full-length. Its transparency and sharpness refine the songs while giving them the last kick. Therefore, Gama Bomb catapulted their music to the highest level. In view of its effervescent liveliness, The Terror Tapes is a quantum leap compared with their previous outputs. I would even go so far as to say that it seems to be their unofficial best of-album. But let's see what the future will bring. If the spirited band is able to preserve its enthusiasm as well as its fine sense of humor, we can hope that more fascinating albums are yet to come.