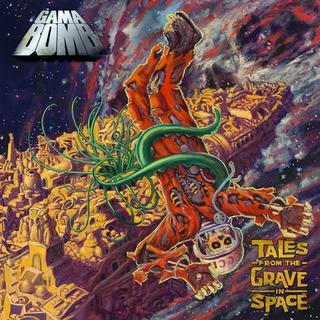 Sometimes life is not pure fun. The beer tastes stale, one does not get a copy of the limited edition of a pink-colored Sabaton EP or an idiot decided to release a "cöver" album of Motörhead posthumously. Then it might be good to have an album of Gama Bomb at hand. The regular format of Tales from the Grave in Space was offered as a free download, but I am speaking about the double CD edition with five extra tracks on the so-called "Half Cut" disk. Anyway, let's follow the record company and start with the songs of the regular disc.

Tales from the Grave in Space, ornamented with a very stylish and extravagant booklet, does not fully reach the high level of its brilliant successors, but it conveys the energy of the band in a convincing manner. All musicians seem to be haunted by a restless swarm of bees. It therefore comes as no surprise that high velocity is the first topic on the agenda and rasping guitars shred everything that stands in their way. The bass guitar does not have a prominent role, but at least it is more or less audible. By contrast, the voice of lead singer Philly cannot be ignored and some of his high-pitched screams have the potential to cause a shock-induced paralysis. In other words: good performance - and well supported by strong background vocals every now and then.

The album holds many elements that reappear on the later works. A "robot" adds some vocals, the Ninjas have already entered the stage and a miniature song is also included. Okay, the funny "Mussolini Mosh" lasts 72 seconds and it has almost a complete, regular song patterns due to its - surprise - mosh parts. However, a dimwit like the fat Italian fascist does not deserve a longer track. The other tracks are located on both sides of the three minutes mark and their restless riffing forms the basis. Sometimes the album almost sounds like a vinyl which is played on 45 instead of 33 rpm. And, great luck, I have found a detail to criticize: the nearly omnipresent high-speed leads to a certain uniformity of the individual songs. But don't get me wrong, this constitutes actually no big problem - and gripping eruptions like "We Respect You" (this one is not about Mussolini) or "Apocalypse 1997" are still able to leave a lasting impression.

"Mummy Invasion" with its - of course - ultra fast riffs and great lyrics ("Dehumanizing mummifying like a day spa gone wrong") finishes an album which makes you congratulate yourself to your very good music taste. And the "Half Cut" CD is a welcomed prolongation, because its songs are cut from the same cloth. The songs rush by without neglecting a certain easiness. Tracks like "Cellar Dweller" are simply too strong to fall into oblivion, although they do not appear on the regular edition. Despite some punk vibes and an extra portion of fun, Gama Bomb have penned a pure thrash album. By the way, a very good one.