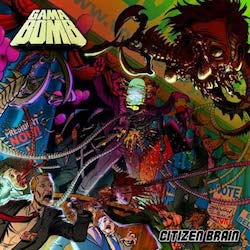 In my humble opinion, Citizen Brain was the first impressive Gama Bomb album. The debut left room for improvement in terms of production and with regard to the song-writing as well. The here reviewed album fills this room and scores with a much faster musical approach. The velocity of the single tracks is remarkable and the mid-paced, dull tunes of the predecessor, which could have originate from Nuclear Assault's partially mediocre "Survive" period, are a thing of the past. Citizen Brain seems to be a result of a one-night stand of Nuclear Assault's "Game Over" and the second album of Holy Moses, the famous "Finished with the Dogs". High speed is mandatory, old school vibes are omnipresent and a penchant for straightness enable the band to pump its thrash infusion directly in the listener's brain. Not to mention the production. It does not deliver the blueprint in terms of transparency, but it offers an appropriate degree of clarity, sharpness and pressure.

In their best moments, the songs seem to lever the law of gravity. "Hammer Slammer" demonstrates impressively what I mean. The song mixes airiness with high velocity and takes off. Despite its proper heaviness, it seems to float above the ground. I am sure that the Gama Bombers have put heart and soul in this work, but fortunately, it does not smell of sweat. They do not use a crowbar to create metallic highlights, their tools ask for a higher degree of dexterity. The constantly humming guitars and the straight yet competent drumming evoke a feeling of restlessness, but Gama Bomb are not on the run. They know what they do with the effect that adolescent nonchalance shapes the tunes. The fact that the songs rely on very similar (and extremely lean) song patterns does not mean that they are the spitting image of each other. It is just positive that there are no obvious fillers in view of the breathless approach of the guys who are burning for action.

Fun, nonsense or bullshit? The quality of the lyrics is in the eye of the beholder. Lines like "vomit, vomit, vomit, vomit" or "we'll draw cocks on your face" ("Thrashaholic") do not enrich the cultural achievements of mankind significantly, the text of "Time Crime" is confusing and the lyrics of "Hammer Slammer" could be misunderstood. Maybe some stupid fascists think that the first-person narrator is one of them while purifying the cities ("I drive victims into the ground like nails into a bit of wood / Every day I'm on the news but none of them has understood / I watch TV, what do I see? / A useless world that's full of shit"). Yet we know it better and Gama Bomb are anything else but politically dubious. Thus, everybody who enjoys rapid no frills thrash which is offered with a twinkle in the eye can listen to Citizen Brain with a clear conscience. The authenticity, the energy and, last but not least, the improved compositional skills of the musicians form a good, although not phenomenal work.