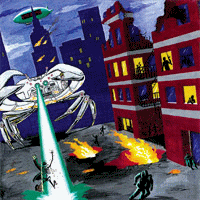 It goes without saying that an ill-defined guitar sound, dull and somewhat sticky, and almost non-existent drums do not set the right frame for an exciting album. We all know that some outputs with really great songs suffer from a below-average recording result. Titles like Beyond the Gates or Evil Invaders come to mind in this context and it is surely common sense that it is always a disgrace if excellent compositions are nearly murdered by a weak mix. But, good news, Survival of the Fastest does not share this fate. Yet this is no cause for celebration, because the debut of Gama Bomb suffers from ill-defined guitars and non-existent drums as well. The only difference to the aforementioned outputs is that it does not hold actually great tunes. Seems like we have backed the wrong horse, because this first full-length of the pleasant freaks from Northern Ireland offers nothing else but second tier crossover thrash.

I really like their later works very much, but two important features of jaw-dropping albums such as The Terror Tapes are missing here. Firstly, the average velocity is too low. Mid-paced rhythms fail to create the liveliness that characterizes the masterpieces of the band. Secondly, this well appreciated iota of insanity, celebrated for example on their last album Untouchable Glory, does not appear. Their later outputs border on madness, but here everything is under control and therefore I just sit in front of my speakers and listen more or less thoroughly, but I do not merge with the music during the 34 minutes. Survival of the Fastest, the title must be meant ironically, lacks charisma and character - and I am sorry to tell you that there are not many songs which stand out.

With a great deal of good will, one can say that "Atomizer" has a memorable chorus. Furthermore, "Racists!" is opened by a good riff and scores with a remarkable solo section, but it appears as an ironic twist of fate that the track reminds me of Billy Milano's M.O.D. Yet in general, only a few number of riffs, leads and melodies is convincing. Even Philly Byrne fails. His voice sounds ordinary and does not develop any kind of personality. One cannot compare his performance here with his fantastic contributions to the later outputs. His high-pitched screams lack of natural eloquence and his normal voice sounds alarmingly boozy. But to come back to the beginning of this review, the unbalanced production kills all good ideas and hence this album is the nadir of Gama Bomb's catalogue. It was a first step into business, no more, no less. Viewed from an historical perspective, one can lend an ear to this album, because songs like "Hell Trucker" and, to a lesser extent, "Skellington Crew" indicate the great potential of the guys. But do yourself a favour and choose one of their other works if you like to listen to intoxicating thrash with trace elements of fun and punk.