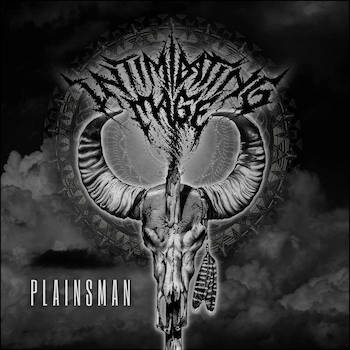 One-man band, Intimidating Mage tears down the walls of ignorance mankind has housed himself in for so long, in so exposing him to the punishment that has been long overdue by the hands of fate. Touching on topics such as religious neediness, foolishness and what I interpret as being Earth's revenge on humanity, Intimidating Mage does a fine job of playing theme songs that very well project the hostile atmosphere that leans weightily against the carelessness and arrogance of mankind's teachings and workings. Plainsman is a record that boldly stands in the face of the pest race, angrily listing his transgressions and the suffering it is accompanied by.

The sound on Plainsman can be described as ominous yet dismal; dire tones come as a result of entwined musical styles such as death/doom metal, and black metal (instrumentally). The chaos, melancholy and anger retained in the tracks are truly something I admire considering this is Intimidating Mage’s first outing. As can be heard on the notes of the opening song “Plainsman”, this one- man effort does a fantastic job of sculpting diverse melodies and harmonies to reflect the meaning behind the lyrics. Though very cryptic and poetic the text to the songs may be, one can still get an idea of what is being poked at via the small hints given. The effect generated when the lyrical content is in unison with the musicianship shines brightly.

“Plainsman” sets the tempo with no introduction track preceding it; heading full-speed into the material, it shows off a late 1st - early 2nd wave black metal influence in its composition direction. However, other styles are brought into the greater image of “Plainsman”, some groove metal is keyed in and built upon using an acoustic guitar and spoken poetry that suddenly launches into a furious drum, guitar and vocal attack.

“Transcendence (A Vision)” is like a melodic avalanche that sweeps the disastrous debris into one great pile and sends it tumbling down with a glorious force. This track takes the music from its opening sound of contemplation to its acted-outrage that is in turn complemented by a regretful sense when the power chords and double bass clash against each other. You truly feel as though the end is nigh as a result of denying the one thing that has sustained your life alongside that of millions. This melodic approach is proudly followed-up on “Slit”, which is (for me) the best song on Plainsman. It’s melodic hooks and rhythm paints a desolate image, somewhat matching the artwork and gives mankind a view of the land he has butchered in-considerably.

Plainsman is not without faults, as there are some aspects exhibited that could have been implemented and executed to better avail. The track arrangement being one of those; “The Last Song of the Seraphim” would have better served as an introduction to the music to follow, as its placing as the second track showed a minuscule to non-existent effect. Or, it could have been placed just before “Slit”, because of the gloomy tone of the narration, this would have been a strong reinforcing agent of the themes explored on Plainsman.

As mentioned “Slit” is (for me) the best track on the record, because it manages to flux from one type of musical style to another all the while offering the best and most memorable passages. In addition, it has a noticeable climax, one that is better than that of the final original song “Indifference”. Therefore, having “Slit” replace “Indifference” as the closing moments on Plainsman would have seen the music establish a heightened musing effect, something that I look for especially in conceptual records. Also, the scope of its epic sounding instrumentation invokes a feeling of shock and awe that matches the catastrophic and at times mournful tones of Plainsman. Meanwhile “Indifference” sounds like a track fitting to be an opener as its doomy groove mixed with both black and death metal vocals capture the essence of the multiple emotions demonstrated by the music.

The Bathory cover “Equimanthorn” was relatively well done, however I found this track as being unnecessary, or should not have been a part of the original recordings as it somewhat ruined the atmosphere created throughout the record. In addition, the cover could have been placed on a different cd perhaps, as to avoid tampering with the scenery engendered on Plainsman.

Production-wise, the material as a whole can be heard with enough clarity, thus said, the drumming could have been tightened-up a bit as it sounded a bit loose on Plainsman when tackling the faster sections of any particular song. It’s not relatively damaging but was noticeable enough to point-out. In total Plainsman is a worthwhile album, definitely worthy of multiple listens and for a 1st entry, it speaks greatly of what is to come from this project.