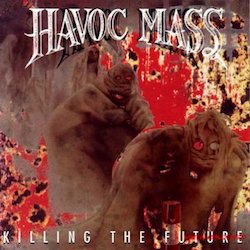 Countless bands have fallen into oblivion and Havoc Mass is one of them. It goes without saying that there are thousand ways which can lead to failure. The handicaps of Havoc Mass were probably the lack of unique features, relatively unspectacular compositions, a terribly bad artwork and the fact that the three-piece did not create a strong image. The sticker on the album ("Ex - Nasty Savage, Last Rite and Fester members from Florida, USA") was no eye-catcher as well and, aggravating the situation, it announced a misleading information concerning the style. "Intense fast thrash-core" might have been the right description for Nuclear Assault's famous debut, but here we have a bastard of power and thrash metal. Finally, the spirit of time did not ask for such an album in 1993.

However, Killing the Future has its moments. Generously interpreted, the album holds sometimes slightly progressive song patterns, even though it is far away from an album like Watchtower's "Control and Resistance". Maybe Nasty Savage really can be understood as a point of orientation, but don't expect a comparable voice. Nasty Ronnie has remained more or less unique, while the vocals on this compact work (33 minutes playtime) are completely ordinary. Not bad, but ordinary. They lack individuality and while doing so, they reflect the compositions fittingly. The staccato shouts of "Distant Signs of Sorrow" keep sticking in the ear and one could mention a few numbers of further examples. Nevertheless, many songs come and go without leaving their footprint. They are decent, they do not suffer from feebleness, but the last iota of conviction and determination is sometimes missing. Nonetheless, a track like "All That Is Evil" scores with good guitar lines and a gloomy mood at the end. Speaking of the axes, the band has forged a certain number of ominous parts with more or less menacing guitars. They constitute a pretty stable fundament, but Havoc Mass forgot to build a palace or at least a big house on it.

Production-wise, the full-length shows no significant signs of weakness. Just like the songs themselves, the technical implementation is neither overly impressive nor bad. The songs don't lack pressure and the overall picture is okay. Only the bass guitar comes off badly, but this wide spread symptom is not really worth mentioning. In conclusion, if you have not heard this album so far, your life can still be complete. But if you wake up on a rainy Sunday and your girlfriend wants to visit her somewhat nerve-shattering mother, it might be a good idea to look out for these nine songs. Maybe one of the abovementioned tunes, the pretty threatening "Prime Directive" or the martially titled "Pools of Blood" will let you have a good time. But even if they fail to attract your attention, they might be less strenuous than an afternoon with your future mother-in-law.