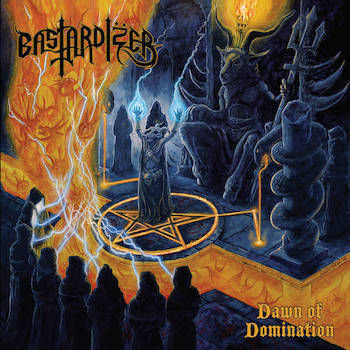 Metal is not immune against trends. From this follows that shit like grunge grew out of its miserable nursery. But there was also a time when thrash bands were shooting up like mushrooms and black metal had its heydays some years later. But the special mix of both styles has existed in the underground right from the beginning and it has never seen the bright side of life. People who like music that celebrates hellish vileness will agree that this is not fair. In a world full of bad music both within and outside the metal scene (but especially outside), black thrash metal is completely underrepresented. Bastardizer alone cannot rearrange the balance of power, but Dawn of Domination definitely points in the right direction. Well, it is probably not pure black thrash, but I doubt that a bastard genre can bring pure albums to life at all. Thus, the marginal Motörhead references can be neglected, even though I don't want to hide that "Whiskey 'til Death", the stormy tribute to Mr. Kilmister, enriches the album. This driving main riff has a lot of exciting vibes. However, Bastardizer mainly wallow in simple (but not primitive), filthy (but not stinky) and straight (but not mindless) blackened thrash and they do it in an authentic way. Having that said, let's dive into some more details.

The band knows the importance of high velocity and focuses on fast rhythms after the rather hymnal intro. The songs come and go in swift succession, but this is not to say that they fail to leave a powerful and mangy impression. Stomping parts also show up and in combination with the rapid sequences, they lend the pieces an extra dose of dynamic. I recommend checking out "Crimson Trenches" in this respect, even though it cannot compete with its direct successor. "Death Cult" is powered by an excellently flowing guitar work which is based on a brilliant riff. Here we have the glorious moment of a perfect fit between the hellish riff, the slightly boozy yet robust vocals and the unscrupulous drumming which commutes between mid-tempo and blast beats. In particular the outstanding verses with its merciless straightness and the apocalyptic chorus destroy everything that dares to cross their way. This is a song Satan could not have done better.

Followers of bands such as Aura Noir, Deathhammer or Condor will have fun when listening to this album, but one does not need to originate from Norway in order to understand the greatness of sonic attacks such as Dawn of Domination. Bill Morgan, guitar player and main composer of the quartet, has forged so many diamonds that I only can express my surprise. Of course, the lack of plurality reflects his distinct narrow-mindedness in terms of music. But when it comes to the here presented style, his mentality is rather a quality feature than a disadvantage - and those who do not share this point of view probably have absolutely no affinity for black thrash. So, keep on farting into your silk pillows and be sure that you cannot hinder me from going wild to razor-sharp outbursts like "Up the Ante". This piece is nothing less than a raging beast that seeks its prey. And so, it's time to quote from Darkthrone's lyrical art: "Victims do your job - die".

Talking of our most beloved Norwegian duo, Bastardizer do not follow the strange philosophy of these two dudes in terms of technical implementation. I know that Fenriz and Nocturno Culto have released many well sounding albums in the meantime, but I still do not understand the ideology that ruined the production of "Under a Funeral Moon". Fortunately, the here presented eleven tracks are based on a more than solid production which underlines the meanness of the compositions. Indeed, most songs have the menacing undertone of further Australian hell fighters such as Deströyer 666 or Assaulter and this feels very good. So, come on, non-owner of silk pillows, get in touch with this output that offers everything but a peaceful environment. Even the fantastic outro sequence of the closer promises’ danger. I am impressed. As mentioned before, metal is not immune against trends, but hopefully at least these four ruffians will remain steadfast.