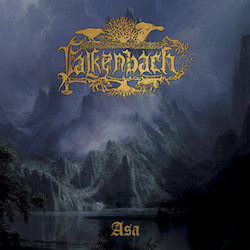 Three letters stand for the rebirth of the "true" Falkenbach. Asa. After some pretty mellow outputs, I thought that Markus Tümmers would not be able anymore to return to a harsher approach, but he surprised me in a very pleasant way. This does not mean that this album with its perfect artwork, another great picture of Albert Bierstadt, does not house silent tones. Nonetheless, they do not prevail, even though one of the absolute highlights of this work belongs to the most meditative tracks the dude from Düsseldorf has ever written. The more or less spiritual "Eweroun" is like a long and silent river, but its immaculate melody makes it to something great and the calming yet powerful vocals deliver the cherry on the top. All these cautious tracks from the last three albums suddenly make sense if we understand them as a necessary exercise in order to create finally this mantra-like masterpiece which is the perfect invitation to sit down and relax. Just listen, enjoy the flawless production of Asa and let your thoughts flow freely.

A handful of tracks reflect the predatory side of Falkenbach. "Wulfarweijd", "Bronzen Embrace" or "I Nattens Stilta" make clear that Tümmers has rediscovered his will to shatter the silence every now and then. Not to mention the furious "Stikke Wound" which presses the artist's rage in a hefty eruption of less than three minutes. These songs illustrate that there is still a fiery core in Falkenbach, while I had been in fear that he just stores the ashes instead of keeping the fire burning. Needless to say, that there are also some very typical songs which combine excessive melody lines with clear, announcing vocals. These tunes show up like the mighty mountains on the artwork which appear out of the mist. No doubt, the lone wolf combines his tried and tested trademarks with stormy outbursts and the result is absolutely convincing. A mostly solemn yet occasionally nearly cruel atmosphere dominates the sound and it feels good that the modern skald is willing to offer his complete portfolio again after some years of voluntary self-limitation. He never released a really weak album, but it is simply great to hear his cocktail of robust guitar chords, almost mystical keyboard lines and raw vocals. The mix is what matters and unlike its predecessors, Asa finds the right balance.

Maybe (or certainly?) I am a picky old geezer, but I will never understand the way of thinking of some people. Why wasn't it possible to press the thirteen tracks of the 2CD-version on one disc? Who felt the need to seduce the fans to buy a luxury version? Of course, we all know the stale "excuse" of the industry: nobody is forced to buy an album, we just make an offer. But come on, that's ridiculous in view of the well-known mindset of a loyal metalhead. Be that as it may, the four tracks of the second disc achieve the same quality level as the regular tracks and they also do not follow another stylish approach. Okay, don't be fooled by the title of "Return to Ultima Thule". It is not part two of "Ultima Thule" from the debut, but a strong alternative version of this track. The recycled composition shows once again the glory of the early days of the band due to its strict and compelling pattern. Yet the remaining material of the second disc is completely new and with that said, it goes without saying that the second disc enriches the entire output sustainably. This even applies to the calm closer, an instrumental which reminds me of the rather peaceful songs of In Extremo (but without bolshy bagpipes). In a nutshell, this edition of Asa delivers the soundtrack for the next midsummer festival in Thule. Enjoy the very strong hour of pagan / black metal while avoiding any kind of fillers. Hopefully, Tümmers returns soon with an equally strong successor.