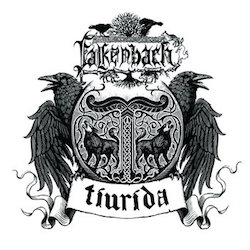 First rule: either you have absolutely meaningless song titles which are not worth mentioning or you should not print them in black letters over a picture with black trees. Falkenbach forgot this golden rule on Tiurida and therefore I welcome you to songs like "Tanfa...?" or "Runes shall... w". Thank God, we have M-A that helps us. Nevertheless, a crude design, but the sound of Falkenbach's fifth full-length does not suffer from comparable deficiencies. Tiurida is based on a clear, organic appearance which gives the music room to breathe.

So, what about the music in general? The heathen from Düsseldorf has always had very good song-writing skills. The intro can be neglected, but each and every of the remaining tunes scores with coherent, slightly hypnotizing melodies. Falkenbach paint great pictures of sweeping landscapes and their vastness is fascinating. Sometimes the songs have a melancholic touch, sometimes they appear as the soundtrack for a long and silent journey through autumnal forests. The material is located between folk and metal and I wish that it would be slightly more powerful, but the one-man-army behind this project seems to be the epitome of inner balance. Even the tracks with darker, more vehement parts, "In Flames" for example, have surprisingly soft facets. Honestly speaking, these configurations remain a mystery to me, because they drain power from the tracks. "In Flames" starts with enchanting yet robust guitar tones, but its silent middle section reduces this very promising number to a normal level.

Let the truth be told, it's not easy to be fair to an album like Tiurida. On the one hand, I appreciate the fact that the music relies on outstanding melodies. Moreover, the artist still does not focus on commercial success. He seems to play what he feels, and he does not care too much about the expectations of his supporters. On the other hand, Falkenbach once performed a more combative style and I miss the rapid rhythms of the debut. Furthermore, all melodies point in the same direction. This results in a homogeneous output, but the level of excitement remains manageable during the entire playtime. Maybe (or surely) I am not the right person to review this kind of pretty cautious music. I like it, but it does not make my pulse run faster. "Time Between Dog and Wolf", the only song with more or less aggressive and raw vocals, marks the exception to the rule. However, I don't understand why Falkenbach did not pen one or two "real" metal songs. Even this mid-harsh number is equipped with Tiamat-esque background vocals ("aaa-haaa-haaa-haaah"), just remember their quite strange "Wildhoney".

After all, one thing is certain: Tiurida is free from fillers. Falkenbach's first outputs remain untouched in terms of quality, but this album makes more sense than the slightly half-hearted compilation Heralding - The Fireblade. The captain avoids rapids and due to this, he does not show his entire competences. This and the fact that the German poem in the booklet is also hardly readable are marring the overall impression of a good yet somewhat defensive work.