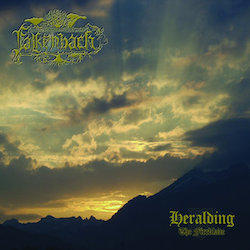 Heralding - The Fireblade is no regular full-length, but a re-recording of older songs that are mixed with some previously unknown tracks. This fact alone makes it slightly difficult to describe the album as a whole. "...of Forests Unknown", for instance, is based upon some straight and fast-paced, double-bass driven verses, the voice conveys pure combativeness and every Christian camp near the Northern coasts is on red alert. A very strong number that pleasantly reminds the listener of some pretty harsh tracks from the debut. But don't think that this piece represents the complete material. Generally speaking, the compositions follow a relaxed and "skaldic" approach. Fast rhythms do not play a very prominent role and the vocals switch from clean to aggressive and back to clean. Each and every number has a sufficient substance, but I miss some furious moments. Especially "Hávamál" does not belong to the most adventurous tracks I have ever heard. Indeed, some parts of this patchwork don't work and deliver rather fatiguing sequences.

Okay, let's stay fair. The sixth track boasts, among other things, with fantastic guitar lines and explosive drums. It storms over the Northern sea like a natural force, doesn't it? Yes, but it has already been released on the debut. Even the opener is already well known, it appeared on the second full-length. To be honest, it remains a mystery, why the artist recorded these pieces once again. I admit that "Heathen Foray" (once titled "The Heathenish Foray") reveals its full potential for the first time. Falkenbach celebrate a majestic, mighty and triumphant epic and it would have been a great bonus track, no doubt about it. Nevertheless, I don't understand why it was chosen to kick off the album. Has the captain of the dragon boat lost the orientation? Either way, the dubiously compiled full-length has more in common with the (too) restrained "Ok nefna tysvar ty" than with the first two works and some almost shy compositions suffer from seemingly endless "ooohooohooo" or "a ha ha" vocal lines. Where is the rage of the Northmen? In my humble opinion, acoustic guitars are not the right vehicle to transport their archaic way of living.

Production-wise, Heralding - The Fireblade has no reason to fear any comparison. The album sounds warm yet powerful, robust and well-balanced. This and the fact that the lone wolf behind this project has a talent for great melody lines result in a decent work, even though some songs seem to be left unfinished. Especially the endings of a couple of tracks convey a surprisingly awkward approach. Nevertheless, once one has got used to the album, it's a pretty good soundtrack for a relaxed Sunday afternoon (or a Saturday without football). Falkenbach was and still is a force to be reckon with, because its outstanding artistic quality always shimmers through, even though it does not always shine in full glory on this output - and that's the reason why the rating does not exceed the 70% mark.