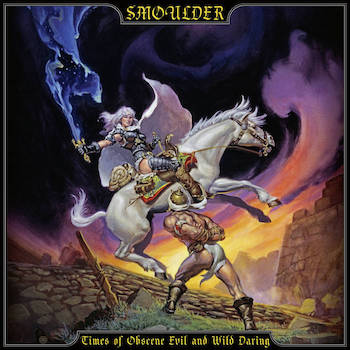 Canada’s doom/traditional heavy metal scene has seen its share of great releases coming from the surge of new bands revamping the genre. New comers Smoulder joins the pack of bands that play to the age of epic doom/heavy metal fantasy. Comprised of four members including a familiar face (Sarah), I was interested to hear what exactly Smoulder offers in comparison to many new acts performing within the same vein. Upon first hearing the material on Times of Obscene Evil and Wild Daring I was not sold, but with repeated listens I latched on to what Smoulder was trying to accomplish with their sound. The reason for my dubiousness came due to Sarah’s voice which is not bad by any lengths, it's just that it somewhat lacked the velocity/power I was looking forward to hearing, given the epic metal tag. However, with multiple spins, I found where her vocal strengths lay. I'm aware Smoulder have a release prior to this but I avoided listening so as to let the current release have its space and create a slate of first impressions.

From the onset of “Ilian of Garathorm” the bass heavy beefy production is made present; the mid-paced groove stirs the atmosphere for some enjoyable headbanging that is in turn supported by a decent guitar solo. It opens on a high note and closes on one, great track and definitely a highlight of the record. Immediately after, comes “The Sword Woman” that showcases the doom metal aspect of Smoulder’s approach; the lead guitar work is again descent that is amplified by the splendid solo towards the end and Sarah’s better use of range. Hence noted, her vocals seem to be much stronger on slower tracks than on the faster mid- paced ones such as on the opening entry and “Bastard Steel”. Her voice is more effective when the lyrics are sung in a slow fashion, as room is given for her vocals to ascend to impactful heights.

The best entry on Times of Obscene Evil and Wild Daring takes the shape of “Voyage of the Sunchaser” that lifts the momentum to a peeking height, one that exhibits all the strengths of Smoulder. Catchy choruses, confident vocals and just yet another fantastic display of guitar soloing. I found the final 2 songs to be a bit lacking in comparison to the prior, especially when one (“Shadowy Sisterhood”) sounds similar to prior tracks despite the powerful short opening solo heard. I didn't really like the way in which the lyrics were constructed on that occasion, sounded unorthodox in retrospect to what had already been played. Those two were not bad but didn't do enough to compete with the preceding. And though the drumming being noticeably more technical on the final song that is doom metal dominated and the longest stretch of the record, still it appeared to have more filler than necessary. Looks like Smoulder put their stronger tunes up the order; if so, the decision paid off given the high replay ability of tracks 1 through 4.

Sarah’s vocals do have their share of flawless moments and faults; with the former outweighing the latter. The guitarist on the other hand gave a blistering performance in support of Sarah's vocals and the resonant drumming. There’s a good balance of doom and traditional heavy metal on Times of Obscene Evil and Wild Daring; however I would have preferred to see a mixture of the elements on the songs as opposed to having each song be exclusive to any of the mentioned genres.

Overall Times of Obscene Evil and Wild Daring is a good full-length effort that has enough quality content to satisfy myself at least. It’s a good record that holds close the values of epic heavy metal.