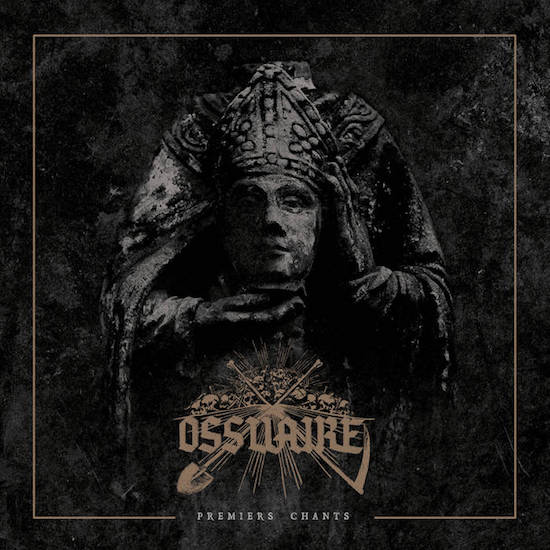 Ossuaire is the name of another French singing battalion from Quebec. Do I need to say more? Guess it goes without saying that the four musicians perform an endless row of flowing guitar lines. The songs do not lack velocity, to say the least, and they could be used in order to herald the apocalypse or at least a force majeure that leaves a trail of devastation. After this successful integration of two French words, my proposal is to go into the details.

No doubt, musicians who write such energetic and explosive songs like the two which open the album can hardly just sit around. Their ravenous appetite for activities leaves them no choice, they have to create something great and given this situation, it is no surprise that their attitude results in furious compositions. The trademarks of the French scene from Quebec are not missing, but Ossuaire have found their own way to celebrate them. They bundle their energy in five songs while one track ("Exhortation") is rather a kind of conjuration ritual than a song. I am not convinced that it was necessary to integrate this unusual piece. Anyway, this album still holds a lot of substance. The remaining compositions present an elemental force that combines clearly defined melodies with ultimate dedication. Passion meets musical skills and this liaison - another French word, right? - definitely has an effect. One gets embraced by the relentless harmonies which sometimes pay tribute to some icy Norwegian leads from the mid-nineties. The voice, equipped with a lot of reverb, supports the demonic approach masterly. Sometimes it seems as if the lead vocals originate directly from hell. Sometimes background choirs strive for a solemn mood. Either way, all these different ways of articulation work and so here is nothing easier than to forget everything around while listening to Premiers Chants.

Just like all their comrades from their home region, Ossuaire never lose control. The compositions stay away from any kind of chaos even in their wildest and fastest sequences. Okay, the sound could be a tad more transparent. Its density is impressive but at the same time exactly this density is the reason why the mix swallows some details. With the exception of the aforementioned fourth track, it could be that all songs sound the same for the less experienced listener. We know that this would be a misconception, but maybe Ossuaire are well advised to work out their sound a bit more carefully. But don't get me wrong, it is definitely a great pleasure to experience how the band lets steam off, especially during the dominating rapid parts - and even less fast-paced sequence like the beginning or the end of "Saints Céphalophores" emanate a compelling aura.

From my point of view, there is no outstanding song, because all of the five "real" tunes are more or less on par. So, there can be no doubt that Ossuaire enrich the MNQ movement and their sound makes no secret of their origin. Believe me, the bands from this spot of the earth have so much quality that they need no camouflage. And rest assured, this was the last French word I used today.