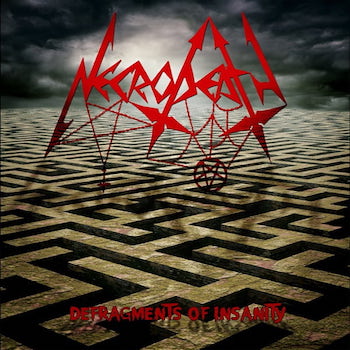 Necrodeath are an institution, no doubt at all. With the exception of the experimental (or let's say lousy) Draculea, they have been completely immune against mediocrity. Nevertheless, there exists an ambivalent facet. The Italians always loved to recycle their own material and both their debut and Fragments of Insanity have been kept alive by many alternative versions of classics on the albums that have been released since the reunion of the formation. In my humble opinion, this has had a dubious touch, because new songs are always a greater creative challenge than the re-recording of old material. Aggravating this situation, the regular albums of Necrodeath do not suffer from overly opulent playtimes, to express it politely. But now the band has taken the next step in terms of recycling: welcome to the complete re-recording of Fragments of Insanity.

Originally released in 1989, the album mirrored the move from an almost heavy-handed black horror metal combo to a serious trash formation. Nevertheless, the band did not lose its two main features on the way from the dark domain to the territory of thrash: There is still a threatening atmosphere and it would be foolish to expect any form of clemency. Of course, the expressive and passionate vocals of Flegias, who was no part of the line-up back in 1989, emphasize these features and give the re-recording a new element. This ruffian has always been a hellish weapon and his style of singing is just one new detail - it goes without saying that the here presented form of the compositions benefit from a brilliant, contemporary mix. I guess it is impossible to create a more direct, straighter and sharper sound than Necrodeath have done here. Especially the guitar sound is overwhelming. Many newcomers will lower their heads ashamedly when they lend an ear to this manifesto of thrashing evil. However, it lies in the eyes of the beholder - is this immaculate production an improvement or has the material lost its slightly dusty flair?

From my point of view, the formation has treated its early outburst with dignity. The re-recording is a typical Necrodeath work and the spirit, the attitude and the mentality of the dudes shimmer through every note. I really like the fact that they deny getting old; Defragments of Insanity takes the listener on a wild, violent and merciless ride and the minimal change of the album's title indicates the degree of changes concerning the musical content. All new versions lie in close proximity to the original songs. And it goes without saying that these songs always had a lot of power, some catchy elements while delivering a pretty engaging spectacle. Finally, the new artwork resembles the original cover as well. Taking all these things into consideration, I cannot deny that Necrodeath have been successful. They have recorded a strong, brutal and intense album and Peso has probably killed a dozen of innocent drum kits in view of his ruthless yet highly demanding performance. Thus, two hearts beat in my chest. Even though I wish they had recorded some new tunes, an EP or just a single, I must admit: this re-recording fascinates me, at least to a certain degree. Guess I have heard the best unnecessary album of the year.