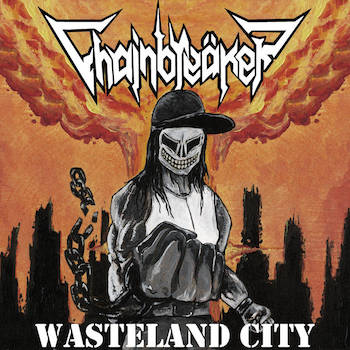 Some basic comments: Linz (Austria) cannot keep up with Vienna, Graz or Innsbruck, but it is no wasteland city as well. Wasteland City is a cool title for a debut which is filled to the brim with old school thrash metal. Old school thrash metal will never lose its juvenile charm. Juvenile charm is one of the things that is shown by those freaks called Chainbreäker who originate from Linz. And Linz (Austria) cannot keep up with Vienna... oh, I am at risk to tell a never-ending story.

Wasteland City welcomes the listener with a "Hit the Lights"-intro, but the quartet does not copy this widely unknown band that thought it is a good idea to record "Lulu". As mentioned before, the guys from the country of mountains keep the spirit of the old school alive and I promise they do not even think about to leave the well-trodden paths of the pioneers from the eighties. Nonetheless, they are not obviously influenced by a specific band. Maybe early Exodus is the best point of orientation, but it is also possible that Holt's battalion is simply always on my mind when it comes to generic thrash metal. So, let's try to describe it differently. Wasteland City is less vile than "Show no Mercy", not as diabolic as "Hell Awaits", but much more authentic than "God Hates Us All". Enough said.

Chainbreäker reach top form whenever the band starts to breathe fire and brimstone. "Rain of Ruin", for example, starts with ingenious, casual riffing, but mid-paced and pretty controlled. This beginning makes fun, however, it's the furious ending that catapults the track to dizzying heights. Of course, there are more songs whose jagged riffs hit the bull's eye and the non-complex patterns make it easy to enter the musical cosmos of the quartet quickly. Pure thrash reigns, only the stupidly titled fourth track holds a few punk elements and starts like a song of the German metal-punks called OHL. It's still a solid track despite an annoyingly light guitar during the instrumental part, but I prefer its rapid and highly dynamic neighbor. The programmatically named "Oldschool Attitude" confirms once more that pristine thrash will never lose its right of existence. The same goes for the effective use of background vocals, Chainbreäker don't hesitate to integrate this stylistic device cleverly. By the way, the lead vocalist does not impress with a spectacular performance, but he conveys this element of hysteria which is always welcome.

Although the booklet and the artwork are rather spartanly designed. the listeners with a weakness for thrash can enjoy this work without having to lower their sights concerning the production. Wasteland City sounds sharp, energetic and lively. Tunes like "Mind Control" blow the audience away in a matter of seconds and a dynamic song like "Blood for Blood" also leaves a trace of devastation, even though it does not only focus on high velocity. The rasping guitars dominate the sound and it just feels good to experience that all these tried and tested tools still generate a fascinating sound. Indeed, these dudes are able to destroy Linz, the city which cannot keep up with Vienna, Graz or Innsbruck... shit, again it seems that I am caught in this endless saga. That irks me, because the only true endless saga is the story of old school thrash metal - the king of sub genres, the style that never gets old, stale or senile.