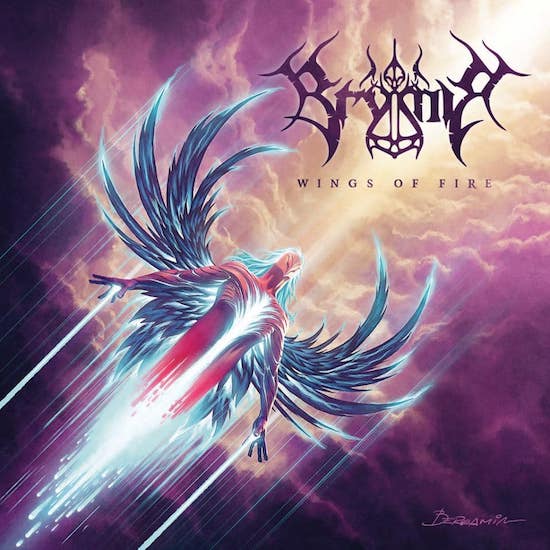 Type: Full-Length
Release Date: March 8th, 2019
Label: Out Of Line Music
Genre: Death, Melodic, Symphonic
1 Gloria In Regum
2 Wings Of Fire
3 Ride On, Spirit
4 Sphere Of Halcyon
5 And So We Age
6 Hails From The Edge
7 Starportal
8 Vanquish The Night
9 Lament Of The Ravenous
10 Chasing The Skyline
11 Anew
MetalBite on YouTube
MetalBite on YouTube

So what about the album? To start off, the musicianship showcased in Wings of Fire is a stark improvement from their last record Slayer of Gods. While the drumming is effective as it was during the last album, the guitar is now much cleaner, the riffs are more complex, and a couple of solos appear here and there. However, the main difference between Wings of Fire and their previous record, Slayer of Gods is the orchestration and the mixing. In fact, while the orchestration on Slayer of Gods felt detached from the music, as though it was an added layer to an existing metal song, Wings of Fire’s mixing and orchestration is much more cohesive and the symphonic elements blend in way better with the other instruments. The best example would be the choir and orchestration after the solo on the second half of the song 'And so We Age'. The choirs are as powerful and as uplifting as ever tying the music perfectly with the themes of grandiosity. While Viktor’s harsh vocals are well executed, they are still not very exciting as they can easily be compared to the rasp displayed in Finnish extreme power metal at large.

While the album is very straightforward, having a total of 11 songs which average at 4 minutes per piece, we can expect the same recipe from one song to another as we are not re-inventing the subgenre. However, some songs do shine brighter than others by either they’re over the top orchestration ('Gloria in Regum', 'Chasing the Skyline', 'Ride On', 'Spirit') or their slower pace ('Lament of the Ravenous'). A special mention must also be made for the last song 'Anew'. The clean vocals from Noora Louhimo of Battle Beast along with an orchestral mix akin to 'Two Steps from Hell' brings the song as close to a soundtrack for a medieval setting game you’ll ever get.

If you feel like you need a dose of epic metal or, as Brymir themselves would tell you «Your soul is longing for triumph and grandeur» then Wings of Fire is for you.