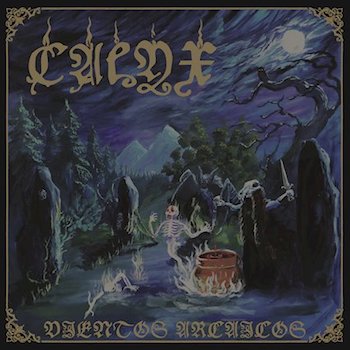 Calyx come storming from the murky thresholds of Spain with their debut Vientos Arcaicos which translates to Archaic Winds which would also hyperbolically describe the material on here. The Spanish metal arena is filled with many great bands spanning all genres, let's add Calyx to the long list.

Calyx plays a blend of 2nd wave black metal combined with 1st wave black metal sections, thrash metal, some eerie doom sections and panoramic landscapes. It is evident from the very first track off the record “La venganza de las brujas” that is Spanish for “The Revenge of the Witches” that Calyx knows the recipe of adequately blending the portions for an effective outcome. All songs are sung in the Spanish tongue adding a spell of native loyalty being cast over the audio. The material on Vientos Arcaicos is pulsing with contrasting guitar work in ranging from first wave to second wave black metal and even some groove and thrash. Most times starting out as 2nd wave black metal then progressing into somewhat semi-technical drumming that is in-turn shouldered by alternating styles, leaving the listener with a spellbinding sense of satisfaction for majority of the record.

Vientos Arcaicos could also be very animated at times thanks to the snarls of the front-man never failing to demonstrate and give a true black metal of old feeling. His high registers are evil sounding (like a corrupt witch) for lack of a better description, and the semi-toned growls add a miasmic presence. When you're having fun jamming to songs like “Asedio infernal” or even the self-titled track, it’s amazing how fast time can unnoticeably shoot by. All entries append to something that is trusted to keep the listener nodding, it’s just the result of good compositional direction paying off for Calyx.

Amazing how the stamina of the vocalist is kept especially when snarling in such a raw nasty way. That's real vocal fatigue for any inexperienced individual and it certainly had to have been a natural trait the way its effortlessly put forth for consumption. Though it’s a long record for my liking, still, the momentum of the songs takes you through with ease and without being exhausted. This could be attributed to the different styles used to create the musical landscapes as heard on the heavy tremolo picking of “La venganza de las” to the fast-paced thrashing of “Asedio Infernal”. Needless to say, but whatever, the guitar work is exceptionally precise when tackling any of the mentioned styles, in so, giving the record an added layer of competency and clarity. And the drumming in moving from thrash metal to black metal and even some groovy sections is clockwork in a (smooth sense of transition). Perhaps a good example would be “La Sima” as it makes clear just how seamless the flow between the genres are operated, hence leading to a solidified piece of craft. Wise musicianship all round, not forgetting the background choirs that appear on “La Sima” and others. They never intrude but offer another layer to the already potent atmosphere of Vientos Arcaicos. This is one of those “out of the blue” gifts that keep on giving, just spend a moment with the title track, then try to convince yourself that's not golden quality. Traditional heavy metal, doom metal (for the song intro), black metal; it’s all there and is homogeneously combined.

Vientos Arcaicos is essential listening, it deserves to be on the map of 2019’s exceptional releases. Don't let this pass you by, you’ll be doing yourself a great disfavor.