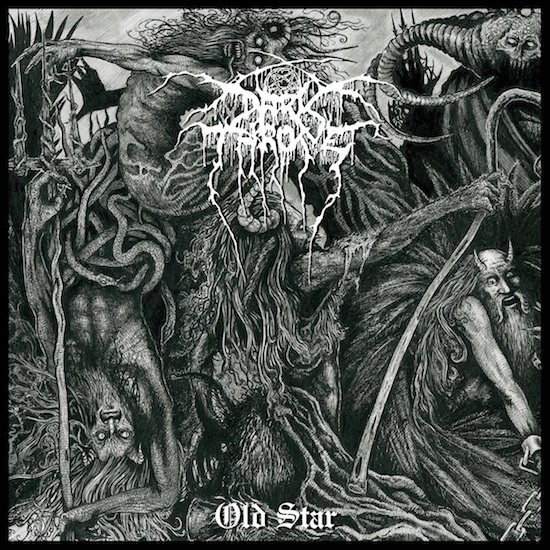 Type: Full-Length
Release Date: May 31st, 2019
Label: Peaceville Records
Genre: Black, Heavy, Speed
1 I Muffle Your Inner Choir
2 The Hardship Of The Scots
3 Old Star
4 Alp Man
5 Duke Of Gloat
6 The Key Is Inside The Wall
MetalBite on YouTube

18. In words: eighteen. Here we have Darkthrone's album no. 18 and this alone deserves respect. But even if we do not focus on sheer quantity, it cannot be denied that the unbreakable duo has become a unique unit. Sometimes acting like a chameleon, the band has delivered pretty different approaches throughout the years. Ravishing Grimness has nothing in common with Under a Funeral Moon and the overlap of Arctic Thunder and The Cult Is Alive is very small, to give just two examples. However, there is one detail that holds their excessive discography together. All albums reflect the spirit of metal and exactly this feature reappears on Old Star. The musicians have come back to a six-songs-configuration and this small number makes each and every song all the more important.

Nevertheless, let's start with some words concerning the production. Of course, the times when Fenriz intended to present a sound as ugly as himself are long gone, and, to be honest, this was an impossible mission right from the start (little fiendishness). Old Star has the appearance a Darkthrone album should have in 2019. It sounds brute and dirty, vigorous and gapless. This makes it easy to enjoy the opener which bursts spontaneously out of the boxes and picks up the strong flow that made songs like "Burial Bliss" so irresistible. A less rapid part does not kill the strength of the opening lines which reappear at the end. A great entry, written by Nocturno Culto - and let's face the truth, it would have been great if he had contributed more than just three songs. Why? Well, Fenriz' tracks are weaker, at least in my humble opinion. Maybe he is confused by his own legendary consumption of metal and its different styles. Sometimes a clear line is missing, sometimes there are too many doom influences, sometimes I think they should have shortened his compositions in order to make them more currish and more compact. However, his passion for real metal shimmers through every note and therefore I want to make clear that I am not listening to tiring, lukewarm or insubstantial pieces. Perhaps Fenriz just wanted to give the heavyweight riffs enough space to present themselves in full glory. However, his stable tracks do not blow me away, although some Celtic Frost inspired sections are well implemented.

Given this situation, it is good to experience that guitarist Culto is on track. While the songs of his companion wallow in relatively slow or mid-paced rhythms, the dude with the over-dimensioned sunglasses has penned the casually titled "Duke of Gloat", another fast-paced attack with gripping, audacious guitar leads and a dramatic sequence after the first chorus. Here Darkthrone pay tribute to the old approach of the once groundbreaking Norwegian black metal scene. They do it in a nearly secret manner, but this section sends shivers down my spine. That's one of the reasons why this song and the opener are my favourite tunes, while the closer "The Key Is Inside the Wall" marks the best tune of Fenriz. It partly breaks out of the droning-riffs-meet-crude-lines-and-slow-drums-scheme and sounds less dotty without hiding the typical trademarks of the cult drummer.

The booklet is slightly disappointing. Unlike some of the previous booklets, it is free from funny, crazy or strange information. The only exception is the following statement: "All work by Fenriz on this album is dedicated to the voice of J.D. Kimball (R.I.P.), What kind of omen is this? A battle cry, a warning of danger or a curse? Perhaps our friend from Kolbotn just had too many nightmares during the last months? I don't know, but one thing is certain: those who like honest, muscular and pretty autonomous music with influences from death, black, thrash, doom and traditional metal, should not hesitate to get their copy. Old Star, a full-length that comes to the point directly, is something for them. In terms of quality, it is located between its two direct precursors and is not prone to obvious defects. And compared with many late works of other formations, Darkthrone's number 18 still spreads a very fresh aroma (combined with the rotten stench that this music necessarily carries with it). Nice cocktail.

I suppose I'm in the minority of people that really covet the later-era Darkthrone - the more “black-n-roll” stuff, that seems to be as basic as can be, seemingly uninspired and pedestrian, yet tangible and entertaining at the same time. It's also deemed a sort of classless regression for most of the ardent, elitist fans, of which I am surely a minuscule part of in theory and spirit.

There are, of course, happy exceptions.

For me, this is the very essence of what metal music - good metal music - should encompass. Not everything has to or should be intricate and / or overly evocative. Sometimes 'basic' is just about as good as it should be. The latest opus from Darkthrone, Old Star, subsists on a steady diet of repetitive riffs, familiar vocal patterns and brief moments of familiarity by way of generously recycled guitar parts circa 1980-83. All in all, it's a nice look back at a distant past that was, for all intents and purposes, leaps and bounds over today's run-of-the-mill musical efforts of similar ilk. Fenriz has always had a severely transparent penchant for all things NWOBHM and “old school,” so this (un)natural progression from death metal, to Norwegian black metal, to the current sound is not all that surprising. Truth told, he seems to have been more out of his personal element during those Under a Funeral Moon, Transylvanian Hunger and Blaze in the Northern Sky years. While those albums were groundbreaking and even good, I never was too sold on the band's black metal sound back when I first heard the band through tape trading in 1991. I thoroughly enjoyed Soulside Journey for both its impetuousness and 'green' feel throughout, but once the traditional / black-n-roll began creeping its way into the music on Dark Thrones and Black Flags I felt more at home with the band. I was among the sparse minions that found the last album, Arctic Thunder, more illuminating than musically offensive, but I digress.

Old Star begins with a thundering riff in the opener, “I Muffle Your Inner Choir,” and from there it just keeps up the 'sing-song' pattern with slight variation mixed in for measure. I tend to personally gravitate towards music that holds me captive, and, more often than not, it's a solitary guitar riff that just holds me there, ala Burzum's trivial, yet enveloping “Lord of the Depths.” Nocturno Culto and Fenriz still manage to call upon some familiar blackened sounds, ala “Duke of Gloat,” which is about as close to the old days as they're going to get with tremolo sweeping and some very Norse-forest-like feeling within. That guitar tone Culto employs certainly lends itself to a caustic, nostalgic aura that seems to fit right in with the overall mood of the record; such familiarity always helps when a band ventures off into another field of play. It seems to lessen the proverbial blow to the more “hardcore” fans unable or unwilling to accept changes. That in place, a track like “The Key is Inside the Wall” just screams out for a nod back to the days of Hellhammer, Celtic Frost or early Venom, with much emphasis on Frost's "Morbid Tales" era. I'm in the class that longs for that sound from the “old days” that seems to be becoming a 'thing' again these days, although most of it seriously lacks authenticity and passion. These guys in Darkthrone have never lacked either in their work; love it or hate it, they can never be accused of being inauthentic.

If you've come here to find something overly intoxicating or thought-provoking in Old Star you're more than likely going to be disappointed, but if you're a longtime study of the band as I am, you'll most likely enjoy and appreciate the growth, albeit a slower, less ethereal shedding of skin. Sometimes things from the past need to be razed to start anew from the ground up, and it's often more necessary than you might think. Old Star submits, for your listening enjoyment, a courteous nod to the forefathers that built this stable of music years before and left it for future men and women to cultivate and care for in their own good time and stead.

It's solid and that's all it really needs to entice you, nothing more and nothing less.