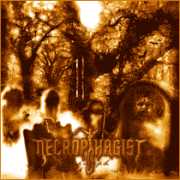 The music of Cannibal Corpse, Malevolent Creation, and Obituary illustrate the fact that, historically, death metal was a genre with little crossover. The notable exception to this historical law was Death. Today, many bands are crossing over, fusing several different genres of music to create (you fill in the blank) death metal. However few bands have had the success Death enjoys in part because many musicians view the work of Chuck Schuldiner as untouchable. I used to think that no band would successfully re-create what Schuldiner did with Death. Recently, I listened to Epitaph, the newest Necrophagist record, and I had to re-evaluate my assumptions.

Epitaph is a great record for one important reason. All of the musicians are able to show their individual creativity, yet not clutter the music in the process. Turkish guitar prodigy Muhammed Suicmez’s performance on Epitaph is outstanding. Sucimez fuses several different styles of leads including those rooted in jazz and Middle Eastern music to create an inimitable lead style. Rhythm guitarist Christian Muenzner matches Sucimez note for note as they thunderously tear through anything in their way. Bassist Stefan Fimmers shows his dexterity as a musician, utilizing the slap-bass tricks of Primus’s Les Claypool and the nimble-fingered, upper-register bass lines of Iron Maiden’s Steve Harris. Drummer Hannes Grossmann acts as the glue of the band displaying exceptionally sharp polyrhythms, delivered with both precision and undeniable power.

My only criticism would be concerning the vocals. Sucimez, who also handles the vocals, relies too much on the cookie monster vocals, which take away from band’s originality. I feel by replacing Sucimez as the vocalist, Necrophagist would be on their way to musical domination of the death metal scene. None the less, Epitaph is a record any fan of death metal music would enjoy, especially if you enjoy the music of Death.