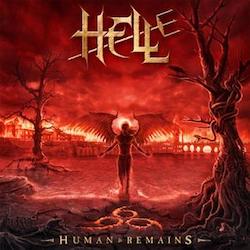 Type: Full-Length
Release Date: May 13th, 2011
Label: Nuclear Blast
Genre: Heavy, NWOBHM
1 Overture (Themes From 'Deathsquad')
2 On Earth As It Is In Hell
3 Plague And Fyre
4 The Oppressors (Race Against Time Cover)
5 Blasphemy And The Master
6 Let Battle Commence
7 The Devil's Deadly Weapon
8 The Quest
9 Macbeth
10 Save Us From Those Who Would Save Us
11 No Martyr's Cage
MetalBite on YouTube

Ladies and gentlemen, the circus is in town. Hell do not only present an album, it's simultaneously a spectacle, a drama, a trip to hell and back (please praise the pun right now). Good things come to those who wait and who would be picky? Not me! It took only 25 years (ridiculous period) until the material was officially released. With that said, the monumental, opulent and excessive Human Remains cannot be compared with normal debuts. It reflects the maturity of experienced musicians, but don't think that I am talking about the usual, almost stale appearance of maturity. Here we have artists who really create something special. M-A says they play "NWOBHM, Heavy Metal" and even though this is actually correct, these well-hung, general terms cover by no means the whole musical range of this group. Maybe not during the entire playtime of 66 minutes, but in its good moments, it feels as if the actors from the United Kingdom add another dimension to (quote:) "NWOBHM, Heavy Metal" and their adventurous work with its many twists and turns houses good moments in abundance. This sonic cinema from 2011 emanates so much atmosphere, charisma and character that I am truly impressed, although a very small number of songs does not fully convince.

Of course, it is very positive that the material profits from the fantastic production. Today Andy Sneap is only the name of a competent guitarist and great producer, but I am sure one day it will be used as a short version for "king of perfect metal sound". Take Saxon's "Battering Ram" or the here praised work, you will not be able to see room for optimization. The songs shine in full bloom due to the transparent, fresh and inspiring sound. The album is based on the clear vision of Sneap who seemingly knew exactly how the songs should sound. Every single instrument benefit from his skillful work and the theatrical interludes (the witches of "Macbeth", for example") or the stage-setting intro hit the bull's eye as well. And it does not happen so many times that a more or less perfect production meets a lead vocalist who appears as an all-in-one solution. David Bower's voice has so many facets and expresses so many moods - I don't think that I will ever comprehend his vocals in its complete entirety. He is a narrator, a lunatic and a herald of evil; he is possessed by demons, he does not fear high pitches and last but not least, he is literally a singer. Don't think, that this is all, but, as mentioned before, I am probably not able to realize his full genius. His contribution to Hell's sound is comparable with that of King Diamond to Mercyful Fate's works and both formations may follow a somewhat similar approach, but they come to different results. Thank God, metal is no mathematics where only one result is correct and so we can enjoy both "Melissa" / "Don't Break the Oath" and Human Remains.

As mentioned before, the band adds another dimension, it does not offer a completely new one. This means that the metallic foundation is not swallowed by opera-compatible elements. Strong or even absolutely excellent riffs deliver a massive contribution to the enormous impact of the material. For example, decorate yourself for listening to the wonderful, driving riff that kicks off "The Devil's Deadly Weapon" after the gloomy intro. "Blasphemy and the Master" also houses an overwhelming riff, it sets in after two minutes. But I don't want to say that one has to concentrate on riffs or further details, just dive deeply into the highlights. The first one (and the best one) is "Plague and Fyre" whose imposing lyrics deal with the catastrophes in London during the years 1665 and 1666. Forgive me that this pretty straight number is my favourite number on a record with rather complex material, but a leopard can't change its spots. Framed by an oppressive intro and a frightening children's choir, the comparatively fast-paced verses and the chorus are hammered into my ears. "Plague and Fyre" opens the gates to the best part of the album. The next four songs also knock on the door to perfection and their complexity is not at the expense of catchiness. Hell, constantly create different moods without confusing the listener and they connect so many different parts seamlessly that I believe, they work part-time as magicians. Believe me, it takes more than only one or two spins to discover every facet of these songs.

Too bad that the remaining songs have to struggle in order to reach the level of these five superior masterpieces. "The Quest", to give but one example, suffers from a slightly vapid and faceless chorus. But the band returns to top form with its "single hit" from 1983. "Save Us from Those Who Would Save Us", now equipped with an intro that deals with child abuse by priests, shatters any form of sanctimony due to its combative, direct and compact configuration. Good to know that such a stormy track finds a wider dissemination now, an indication for the fact that this planet is not yet completely lost. Finally, the bombastic closer has some intensive parts Ancient Rites forgot to release previously and so it brings this monument to a more or less worthy end. However, Human Remains constitutes an absolutely autonomous output. It's one of those debuts that sentence its successors to death even before they have been created. Well, this is how the well-known story goes; you have three (or 25) years for the debut, but only three weeks for the second record. But this is not the guilt of albums such as the here presented one. And so, the final curtain falls. The circus is leaving town and we can be sure that we have seen a really exciting show.