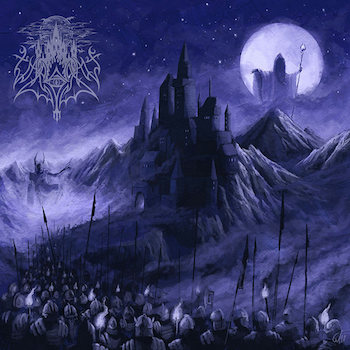 Symphonic black metal was once a well-reputed style, but then came Dimmu Borgir with albums like the idiotically titled “Abrahadabra” and made a hash of it. Today I exercise caution whenever it comes to this subgenre, although I still worship outputs like the first full-length of the mighty Emperor (and their second work was great as well). Fortunately, the first noise-making palindrome has generally a lot in common with “In the Nightside Eclipse”, while comparatively commercial symphonic late-Dimmu-sounds do not occur. Of course, Vargrav do not reach the outstanding quality of early Emperor, but the dense and slightly blurred mix alone gives the album a strong attitude and the music itself also points in this direction. Fans of Limbonic Art and comparable formations should give Vargrav a chance, whereas Immortal-esque song titles like 'Crowned by Demonstorms' are rather misleading.

Reign in Supreme Darkness is less mystical than its kitschy cover wants to be, because it fails to present any new elements to the genre. The one-man-army behind the palindrome does not offer overly icy guitars, his hovering keyboard lines do not surprise with unexpected twists and turns and his genre-typical nagging today ensures the expensive doctor’s bill of the ear, nose and throat specialist tomorrow. That’s all fine, but honestly speaking, the music does not score with the highest degree of excitement. Maybe I am supersaturated, but the “dramatic” sequences do not have the effect they should have. I don’t say that the album sounds predictable, because this would be too negative. Yet I cannot hide the feeling to listen to an autopilot black metal album that knows the streets it can use very well. But maybe that’s the unchangeable fate of a palindrome: in the middle at the latest, everybody knows how the remaining components will look like.

During the seventh track appears a narrator and now even the greatest dumbass knows that Vargrav did not finish the recordings until every well-established element was integrated. This approach is possible, allowed and does not result in a significant reduction of the number of friends of the artist, but the final kick is missing. On the other hand, the lone fighter avoids fillers; every song has a solid substance, smooth tempo changes and enough (but old) ideas. All in all, it’s not easy for me to highlight single tunes. The soundtrack-like intro leads to a quite explosive and powerful opener, but the remaining songs do not stand in its shadow. So don’t get me wrong, the palindrome has released a good, but somewhat unspectacular album. However, not only mom and dad with their kids Bob and Anna can check it out if they have an affinity for this kind of music.

Reign in Supreme Darkness continues the ambient tempest that was proliferated on Netherstorm. Has anything changed on this new entry apart from the album length that's a few minutes shorter than Vargrav’s debut put out in 2018? I would say yes; its atmosphere is more potent on Reign in Supreme Darkness as opposed to the debut which was indeed ambient but not to this degree. Quite an active project though it's only been 1 year and a few months since the release of Netherstorm, a record that many appreciated due to its representation of the early days of 2nd wave black metal. It's slowly turning into a trend and one has to be very watchful because amongst the bands that truly hold dear the days of old are many genre hopping bands that don’t care about the magic created during the 90s but only how they can capitalize on the efforts of those before. Worry not Vargrav isn’t one of those bands; and I’m certain Werewolf Records just won't put out an album of any genre because it's the going thing or at least I hope not. So, second album in and it charms the wizardry a bit more, this time using artwork that is better at capturing the grim yet enchanting aura of the era. A time that saw the rise of Ancient (Norway), Emperor and many more use background keyboards to linger atop the grim and hostile trademark sound of black metal back. Though those mentioned evolved thematically and sonically, their work has definitely not been forgotten as its flame has been kept lit with much ardor.

As mentioned the atmosphere is stronger on this outing, credit to the keyboards coming a bit forward and almost rivaling the guitars on some occasions. However, there is less variation on Reign in Supreme Darkness as most of the songs are almost identically constructed. It's due to this other factor the atmosphere awoken is so ripe with second wave black metal nostalgia. Hardly ever taking a step down from the speeding drums and tremolo riffing, Vargrav still makes space to keep the music a bit diverse with slower intervals of doomy, eerie and melancholic passages. Still though it's not nearly enough to tuck away the overwhelming glare piercing down from the hash vocal shrieks and traditional style of playing second wave black metal. The chilling tempo of the genre long ago still comes to surface on Reign in Supreme Darkness modestly showing it’s features throughout the record. Though I would have liked to hear the speed toned down to let the keyboards have a more definitive spotlight or moment on the record, its collaboration shared with the guitars does enough to convince the listener.

“The Glory of Eternal Night” strikes the listener immediately with icy yet spacey keyboards and background choirs that play along with the crepuscular vocals of project engineer V-Khaoz. It’s the perfect opening song following and intro to greet the listener. If anything, the intro was not even required given just how powerful of a song it is. It's then followed up by yet another nostalgic tease of the senses “Dark Space Dominion”, being honest, it sounds like an extension of the previously mentioned, however, on here there are more diverse sections to be heard in addition to the dimming keyboards and operatic choirs. We get more of the same on “In Streams from Great Mysteries” further cementing the overall feeling and complete aesthetic of Reign in Supreme Darkness, hence the overall aesthetic has been established. To many listeners most songs will sound repetitive, but the differences really lie within the guitar leads, it’s the clash of the choirs and keyboard symphonies that somewhat cloud the music but not in a bad way. The vocals can get a bit too overwhelming as they're featured on each song and could have taken a lengthy break on some instances as to let the atmosphere take greater precedence over the music. Hence said, there were some opportunities in which the atmosphere could have been elaborated in the music a deeper and infinite quality. “Arcane Stargazer” is sort of the idea I’m poking at, the melody is there, the space for each instrument to take the stage is also present and the read passages conjure memories of Ancient’s "The Cainian Chronicle". Plus, there’s more playing room for the ambiance to take full effect; it’s easily the best piece of material on Reign in Supreme Darkness, just wish it had been used as guide for the rest of the music.

Reign in Supreme Darkness doesn’t do anything new but what it does is awaken a longing to rekindle with the agenda of the early to mid-90s black metal era.